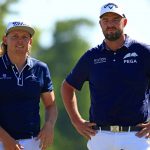 Cameron Smith and Marc Leishman were impressive in their Zurich Classic win, and these are the things you can learn from their performance.

The good times rolled indeed for the Aussie duo of Marc Leishman and Cameron Smith last week at the Zurich Classic. They ham-and-egged it perfectly throughout the week and held off the plucky South Africans, Louis Oosthuizen and Charl Schartzel, to win down in the Bayou.

Here’s what you can learn from the Australian stars.

Footage of Smith messing around with some saucy one-arm pitch shots during practice surfaced on social media last week. It looked like fun to most, but to me it was a lesson and a drill that is all but guaranteed to improve your pitch shots.

While it is easy to do but hard to pull off, it is worthwhile to try as it touches a couple of important elements to a reliable golf swing — a firm lead wrist through impact and good timing between the movement of the body and the swing of the arms.

If you want to give it a try, start with just your lead arm and make some practice swings with a focus on where you want to bottom out your swing. Usually, this is somewhere in the middle of your stance. Once you make several swings and can hit that spot, add a golf ball to the mix.

Address the ball with a narrow stance and the ball right in the middle. As you make your swing, focus on rhythm and length of swing. The action should not be too long with an emphasis on a smooth, well-timed transition from backswing into downswing.

Initially you might mishit (or miss the ball entirely), but don’t get discouraged. If you have an issue with good ball contact, shorten the overall swing and resist the urge to react to the golf ball. Success in this exercise happens when the ball is collected through contact instead of being hit at with a staccato and reactive motion.

Give the one-arm pitch shot a try. It WILL improve your technique.  If it works for the pros, it can work for you.

Leishman hit the coolest greenside shot on the 17th hole on Saturday afternoon. From the fairway, he clipped a low chip and run with a 5-iron to about 4 feet.

After he marked it, he came walking to the side of the green, where I was standing, with a grin on his face. I told him “good shot” and asked what club he’d used.

He responded with “A little draw 5-iron.”

It instantly reminded me of a chip-and-run nugget I got from Hall-of-Famer, Nick Price. Price, when playing links golf, would always try and put a little draw spin on the ball to ensure it ran out predictably.

Even if you do not want to use a bump shot with a straighter-faced club, you should practice hitting low, running draws from close range as they are a great way to simulate compressed, strong impact.

Set up with a narrow stance, feet about a clubhead apart, with the ball in the middle of the stance. Ease your weight to about 60/40 favoring your front foot with your hips rotated open just a touch. As you do this, you should situate your hands a little front of the clubhead ever so slightly.

Train your eyes on the front of the golf ball (target side) and make a mini backswing with no conscious wrist hinging or weight shifting. From there, gently rotate your hips toward the target and brush the turf under the ball with the sole of your club.

The key is to keep the handle of the club in front of the clubface as you swing toward the target line. In so doing, you will create a slight in-to-out path through contact and, coupled with the square clubface (a function of minimal wrist action), you will knock the ball off its axis into a draw bias.