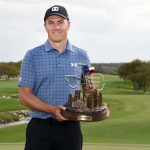 Jordan Spieth broke out of a years-long slump last week as he won the Texas Open.

Jordan Spieth is back in the winner’s circle.  An emphatic victory in his home state silenced the naysayers, charged up his legion of fans, galvanized his team’s belief and, more than anything else, brought palpable relief to Spieth and his loved ones.

The win was a longtime coming and is certainly well-deserved.

For me personally, Spieth’s win was heartwarming, and it took me to a place of reminiscence.  I remembered times of struggle and challenge with players and the emotions and feelings those challenges elicited. I also remembered the times when things worked out and success was relished.

As an instructor to players at the highest level, it was impressive to watch Spieth’s behavior throughout his winless drought. He was nothing but professional and candid throughout the arduous journey. He was an open book and shared his struggles, shortcomings and the pitfalls he was navigating with refreshing candor.

What was even more refreshing for me as an instructor, was to see was how loyal Spieth remained to the folks on his team.

From experience, I can tell you there is nothing as uncomfortable as being a golf instructor on the hot seat. I can only imagine what it must be like for someone in the limelight like Cameron McCormick, who has been Spieth’s long-time instructor.

As soon as a player starts playing poorly, the teacher will instantly click into “fix-it mode,” as there is always a recency bias and urgency.

The truth of it all though is that competitive golf is a lifelong pursuit and temporary technical detours, in the interests of playing well, are typically ill-advisable.

This is where I commend Spieth. He stuck with his man through thick and thin. Oftentimes with much criticism from outside agencies and pundits, he stood firm and resisted the urge to move on, find another instructor and change technique. (He did visit with Butch Harmon to get Harmon’s take but he specified in doing so that McCormick was his long-term guy.)

This loyalty achieved a few things and, most notably, freed up McCormick to stick to the plan and not get wayward in an attempt to find some sort of quick success.

Always remember, the coach/instructor/mentor/parent feels it just as much as you do. The pressure has a similar effect on them as it does you, so do everything in your power to empower them to the self-belief and confidence to remain steadfast in the face of trial.

Here’s what you can learn from Spieth’s experience.

Golf is hard and struggles are inevitable. But remember that you will find your way through the temporary setbacks and challenges if you maintain focus. Those challenges however are not the end of the world; they are merely a chance for you to show off your complete skill set and mental acumen, just like Spieth.

Every great golfer who has went through swing changes has not figured it out overnight.

Many of the most talented golfers to make wholesale changes have taken a significant time before the change settled. Consider Tiger Woods (multiple times), Nick Faldo and Ben Hogan, for example. These are hall-of-fame talents who made swing adjustments and went through struggles before the changes took hold.

If you find yourself struggling in the midst of changes, remember that the process takes time.

Throughout Spieth’s slump he still managed to shoot decent scores, and his immaculate short game is a large part of the reason why. That said, for a little while his putting suffered, but he invested time in that department of the game and his scores eventually trended in the right direction.

Too often I find golfers who are making a change to their swing focus on nothing else but their swing technique. And with that short-sighted approach their scores suffered, and their confidence inevitably plummeted. So, if you embark on a technique change, ensure that you still spend adequate time on your scoring clubs.

There are 2 different kinds of shanks. Here's how to fix both of them