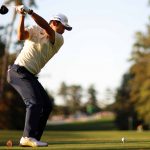 Hideki Matsuyama's game was impressive last week as he won the green jacket.

Ten years after claiming low amateur honors, Hideki Matsuyama slipped on the green jacket. In so doing, he validated all of the praise and expectation heaped on his shoulders since his win at the 2014 Memorial Tournament.

As a member of the media, I’m supposed to be impartial, but I will happily admit that I was pulling for Matsuyama. Not just because he is a wonderful human being, but also because of the global implications of a player of Asian descent winning on golf’s grandest stage.

Lessons from the 2021 Masters were everywhere you looked. I could talk about the casual, free-swinging Will Zalatoris, or about Xander Schaufele and his run at another major.

However, this is Matsuyama’s moment and there are two great lessons to learn from him.

1. Get your putter flush with the ground

Matsuyama has battled with form on the greens over the last few seasons on Tour as he’s ranked 165th and 170th in SG: Putting over the last two years.

Ever diligent, he has worked hard on his form and, of late, he has modified his posture and address to get the sole of the putter flush to the ground. In the past he had the toe raised at address, like Isao Aoki or Seve Ballesteros.

Quality contact with the putter is a function of a square strike on the ball, not just horizontally (toe to heel), but also vertically (sole to crown) on the face. Just like your golf clubs, the sweet spot on the putter is centralized on the face. Bounce a ball on the face of your putter and the result will bear this out. If the toe of the club is raised through contact, excess wrist action can proliferate and a ball that is lined up over the sweet spot could still be marginally mishit.

Mishitting putts is a problem for many golfers, especially in the recreational game. Getting the sole of the putter flush to the ground can help with this as it promotes better contact, which in turn leads to better distance control. The end game is fewer three-putts.

2. Short game is about the landing spot

Matsuyama had one of his best performances around the greens in recent memory at Augusta National. He was sublime around the greens and appeared to have a great understanding on trajectory, landing spots and release.

Larry Mize, the architect of one of the most famous pitch shots in Masters history, told me that when working on greenside shots he focuses on is the trajectory and landing spot of the shot.

This drill is a great one for dialing in your landing spot on the greens and improving your game around the greens.