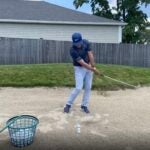 When GOLF Top 100 Teacher Sean Foley has a talented junior (“super-learners,” he calls them) he does something rather interesting with them. He doesn’t have them practice on a perfectly-manicured driving range. He makes them hit balls out of fairway bunkers. Why?

“Because why not?,” he says. “Why wouldn’t you do that? If you make the environment more difficult, the super-learners are just going to get better before you even say a word.”

Put simply, practicing out of a fairway bunker makes golf more difficult, and while that may sound like something only really good players would need to do, you can use the same technique in your own game — and your swing will be better for it.

Sharing a clip from one of his most recent golf schools on Instagram (which you can follow right here!) Chuck explains why practicing out of fairway bunkers is one of the best things you can do for your game.

“If i had 20 minutes to practice and there was only one thing I would do, i would do this,” he says of practicing full shots out of the sand. “It’s way harder than hitting off of grass, and you can always clean it up and start again.” 1. Place stick in the sand

First, Chuck says to drop an alignment stick into the sand (you can use a club, but then the club will get sandy). He’ll explain why in a moment. 2. Place balls along the front of line

Remove the club and begin placing balls in front of the line. As you’ll see, it’s important that your divot occurs in front of this line. If you tend to chunk your shots, you’ll notice the start of your divot happens before the line. Use a lofted club, and as you hit shots, you’ll find that the combination of the line and the sand itself will help keep your divot on the target-side of the line, in front of the ball. It’ll improve your strike and groove an invaluable skill into your swing.

“You can have a lot of low-spot awareness doing this,” Chuck says. “One of the most important skills for good players is making sure you have the circle of your golf swing touch the ground at the right point.”