Why swinging slowly when you practice can quickly improve your swing 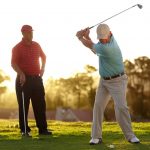 It can be tempting to swing fast when you practice, but sometimes the quickest path to improvement comes from taking things slow.

The typical backswing takes 0.8 seconds while the downswing averages 0.2 to 0.4 seconds. In other words, the golf swing is a short and explosive movement. We all want to improve, whether that be through taking lessons, watching YouTube or even visiting GOLF.com, but sometimes that improvement can be complicated.

The problem with the swing being such a quick movement is that it doesn’t allow much time for thought. Common reaction time is 150ms (or 0.15 seconds), so by the time you think about a swing thought in transition, your reaction to that thought will occur just about the time you hit the ball.

For years I’ve seen the benefits of having students practice by swinging slowly, and over the past month I set out to determine if there is a common speed drop amount where I see learning accelerate.

After detailing the theory and making sure the student understands the focus of improvement, I ask the students to make a full-sized swing at about half speed. After five shots at this pace, we assess and measure the improvement — whether it be a position in the swing, a timing of pressure shift on pressure plates, or a club path improvement on radar.

After going through this process, I noticed the speed with a mid-iron for optimal improvement was roughly 10 mph less than their on-course speed swing. This is the sweet spot of improvement.

At 10 mph below normal their normal swing speed, the student could make a full-sized swing while thinking about their desired swing adjustment and still coordinate the pattern to hit a good shot. Any slower often resulted in poor contact.

The next step was to ask the student to increase their swing speed to what felt like 75 percent of their on-course swing speed. This frequently resulted in a 5-mph jump from the prior set of shots. Hitting this set with the same swing thought again tended to produce the correction needed.

After a series of shots at slower speeds, the students had a greater knowledge of the movement needed, and they had time to think about and feel the change during the swing. This created more spatial awareness, and a sense for how they interact with the club and the ground throughout the swing.

Doing a repetitive movement like the golf swing at high speed all the time can create a sensory amnesia as to how you are moving. Slowing down the motion can reawaken your central nervous system to what you are doing and gives you time to think and then react to the change you want to make.

If you’re having a tough time implementing a swing change, try slowing down your movements while you practice. Once you get comfortable with the new sensations, speed it up and watch the changes take hold.