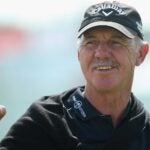 Pete Cowen has taught some of the best ball-strikers in the game today.

On Monday evening, The Telegraph’s James Corrigan reported that Rory McIlroy is making a new addition to his backroom team: Pete Cowen, the legendary coach who has worked with hoards of elite players including Henrik Stenson and Brooks Koepka, among others.

Cowen and McIlroy have long had a relationship — and it hasn’t been hard to spot Rory working on techniques straight out of the Cowen playbook — but with his longtime coach Michael Bannon restricted to the UK because of the coronavirus, McIlroy is adding Cowen as another official set of eyes.

Cowen’s teaching philosophy can’t be summarized in a throwaway sentence, but one thing he emphasizes often is the importance of “swinging in balance.” Cowen often compares the backswing to a spiral staircase, an analogy he uses to explain how to create power while maintaining balance. As he once told Today’s Golfer: “You need to use your lower body and feel like you’re turning a screw with your feet so you can wind up into the backswing.”

Which brings us to another tip Cowen shared in that same interview: “If you watch someone who hits it down the middle all the time, they swing within themselves, finish perfectly in balance and can hold that position for 20 seconds. Most golfers can’t do that because their mechanics aren’t good enough.”

We’re written about this before, but Cowen went on to say that “90 percent” of golfers would probably be better off swinging with their feet together. It wouldn’t cost them much power, but he says it’ll do wonders for their technique.