3 common misconceptions about speed training, according to a speed expert 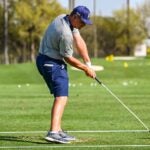 If you're worried about trying to speed train with the best of them, listen up.

If you’re going to start speed training, Dr. Sasho Mackenzie has a simple ask: forget everything you know about the Home Run Derby.

Mackenzie, a biomechanist who teaches at St. Francis Xavier University, in Canada, was instrumental in the creation of the Stack Method, one of the most well-known speed training programs in golf. Through the course of a lengthy career in sports, he has consulted with hundreds of golfers looking to bolster their speed and, with rare exception, has helped all of them. He claims to have found a “biohack” for increasing speed — one that requires both time and golfers to forget everything they think they know about adding speed.

The common concern he faces goes something like this: A golfer is considering his program hoping to add speed to their swing. They’ve struggled with distance for years, but they’re worried that by embarking on a speed-training program, they’ll beget unintended swing changes, and perhaps get worse as a result of the training. Their concern, in shorter terms, is that they’ll face their own version of the “Home Run Derby curse,” in which players struggle with hitting after changing their swing to jack more home runs for the event.

Mackenzie argues that this line of thinking is all wrong for a few key reasons.

The second misconception golfers have is that speed training and swinging are identical behaviors. Rather, the Stack Method is a different sport altogether, one Mackenzie calls “swing stick fast.”

“The mechanics of both swings don’t have to negatively impact each other,” Mackenzie says. “If you have a reservation that might be the case, then maybe you will. When Viktor Hovland grabs a dumbbell, you don’t see him grabbing it saying, ‘Don’t want to grip that too closely, don’t want that to creep into the swing.'”

The third misconception is the idea that players can improve their swing speeds simply by thinking about swinging faster while they’re on the course. According to Mackenzie, this is akin to thinking you’d like to become a better putter, without actually putting in the work to change your stroke.

Like anything else in golf, adding speed requires effort, but it also requires an actionable approach to improvement.

“You can hit drivers until you’re blue in the face,” Mackenzie said. “If you’re not adding any stimulus, you’re not going to see any improvement.”