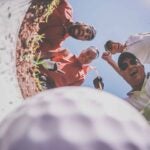 Does a hole-in-one count when a par-4 is modified to a par-3 during a tournament?

During a tournament at our club, the par-4 18th hole was set up as a 150-yard par 3 to add excitement for spectating members — and the hole also was played repeatedly as a “shoot-out” for the top two teams in each flight until a winner emerged. I’m wondering: Would an ace here count as an official hole–in-one? Does it matter whether it was in regulation or in any of the playoff holes?
—Gerard Fehling, via email

The Rules of Golf don’t address the validity of a hole in one, which is the purview of the committee in charge of the course or competition, but the USGA nonetheless offers some guidance on this front.

The organization recommends a hole-in-one made at a hole with a temporary tee — or even a temporary putting green — to be valid, even if the committee didn’t specifically define the teeing ground with tee markers.

(The USGA does suggest that the length of the hole at the time should be stated on the certificate. Such sticklers!)

There’s even more good news: Holes-in-one made during a scramble? Also recommended to be valid! After a match has been completed but during the stipulated round (say, you won 5 and 4 but kept playing and jarred one on 17)? A-okay, too! Just don’t make an ace when you’re using more than one ball during a practice round — that won’t welcome you to the 1 Club.