Rules Guy: Is it legal to use an arm-lock putter while wearing an arm brace? 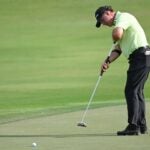 Scott McCarron putts for birdie on the 11th green during the first round of the 2020 PGA Tour Champions Mitsubishi Electric Championship.

I switched to a new Odyssey Arm Lock putter about a month ago. Meanwhile, I developed golfer’s elbow, so I bought a brace with a pad that presses on my forearm. The putter shaft rests against this pad during the stroke. Putting feels more stable with the brace, and I’m holing more putts too, which made me wonder: Is the combination of brace and putter legal? —Chip Chase, via email

Under Rule 4.3b, if you have a legitimate medical reason to use the support, and the committee in charge of the competition decides it doesn’t give you an unfair advantage over other players, then you’re free and clear to brace yourself.

It’s strongly suggested that you talk beforehand to the committee (which may or may not want, say, a doctor’s note to validate the injury) so questions aren’t raised during or after play. Without an exemption, you may fall afoul of Rule 4.3a, “Allowed and Prohibited Uses of Equipment.”

That’s a tiered penalty, with the first infraction the general penalty of two strokes in stroke play or loss of hole in match play, followed by disqualification for a second infraction.