Rules Guy: Is a borrowed tee considered to be another player’s equipment? 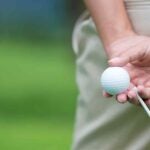 Is a tee considered to be part of a player's equipment?

The other day, I picked up a tee someone had left on the tee box and proceeded to use it. My friend told me this was a penalty, for using someone else’s equipment. He said that if I’d wanted to use it, I needed to have put it in my pocket first to claim that it’s mine. What’s the ruling? —Wade Lindren, via email