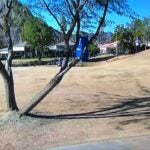 Talor Gooch and a rules official on Thursday on the 11th hole at the PGA West Stadium Course.

Talor Gooch didn’t see a forest through the tree. Just a tent.

And because he did, he was soon looking at birdie.

“This is a massive break,” analyst John Maginnes said on PGA Tour Live.

Indeed. It all began after Gooch’s second shot on Thursday on the par-5 11th at the PGA West Stadium Course, which sailed right and into a patch that was nearly equidistant away from his fairway and the adjacent 16th’s, and about 60 yards from his hole. About 8 feet in front of his ball was a tree that branched upward and to the right. In other words, he was dead.

And about 20 yards in front of the tree was a tent used by the Tour for the broadcast of the American Express tournament. Or put another way, he had new life.

While the tree was in his line of sight between him and the hole, so was the tent. And because the temporary immovable object was, he unlocked relief under Model Local Rule F-23a (2), which states: “Line of sight interference exists when: The TIO is on the player’s line of sight to the hole (that is, the TIO is located on the straight line between the ball and the hole).” In addition, Gooch proved to an official he was allowed relief under the circumstances under F-23a (3), which states: “There is no relief when it is clearly unreasonable for a player to play the ball far enough that the ball will reach the TIO, and There is no relief when the player cannot show that there is a stroke that he or she could reasonably play that would both (a) have the TIO (including the corridor) on the line of that stroke, and (b) result in the ball finishing on a direct line to the hole.”

So, after a discussion with the official, he dropped about 10 yards to the right, which put the tent no longer in his line. Nor the tree. (The USGA has also published a pamphlet that describes the rule, and it can be found here.)

“He’s going to get relief completely away from that tree,” Maginnes said on the broadcast. “… Ten yards closer to the green than the tree is one of these — they have little cameras on top of them. Technology towers. That can’t be moved. And when you have one of those directly between you and the hole, it’s a player option whether to go to the right or the left, because they don’t belong obviously. He’s still going to have a tight lie, with very little green to work with, the pin right toward the water. But at least he’s going to get it on the green.”

Said an announcer: “Taking advantage of the rules, there’s no question, because as John described, it’s a little camera that shows the grid of the green and they have these wires that propel out from it that are anchored into the ground and so you can’t move that and even though he was behind a tree, that was still in the path of his shot, John, so, wow, what a fortunate break for him.”

After his drop, Gooch pitched on to about 15 feet from the hole, and he rolled in the putt for a birdie four. Entering Saturday’s third round, he’s 13 shots behind leader Patrick Cantlay.

“It would be like he snuck away with one,” an announcer on the broadcast said before Gooch’s putt.