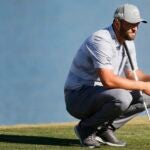 Jon Rahm reads a green by himself during the second round of the American Express.

In eight brisk words, Jon Rahm said so, so much.

Hoo boy! Rahm was walking from green to tee during the second round of the American Express in La Quinta, Calif. this week when one fan caught him muttering that on camera. Did Rahm know he was being filmed? We’ll let you think about the implications of that. In the meantime, without any further explanation from the man himself, we can explain a bit about what he meant.

When a pro calls an event a “putting contest” the natural conclusion is that tee-to-green, most things were created equal, and the aspect of the game that is impacting the leaderboard the most is, as many call it, the luckiest part: putting. The best players in the world are not the best putters; rather they are amazing at reaching the green, and then pretty good with the flatstick, too. And it has been proven repeatedly that many weeks on the PGA Tour are decided by whichever of the best ball-strikers gets hottest with their putter that week.

It’s easy to understand why Rahm wouldn’t like a setup that nullifies (in part) that advantage he’s built into his game. He has been (by every metric other than PGA Tour Player of the Year) the best golfer on the planet for the last 18-24 months. During that time he has won tournaments where it’s a race to 22 under, where the winner finishes in the mid-teens under par, and even in the events where every grinding round of 70 is impressive. In the last three years, he’s won in Ireland, Spain, Dubai, California, Illinois, Ohio and technically tied for a win at the Tour Championship in Atlanta. So when he goes to the California desert, when the high temp is 75 every day and the wind barely registers, and where he doesn’t think his abilities help separate him from the field on every single shot, he’s naturally upset.

But does he have a point?

Unfortunately, Rahm’s words came during one of the rare events where only one course (out of three) is blanketed with Shotlink data. So the analytics of his performance this week, broken down by areas of the game, were only measured during his third and fourth rounds, after the viral video was captured. But even with that being the case, we can tell that this is an abnormally easy tournament for all pros.

According to par, there’s no arguing it: the American Express is the easiest tournament played annually on the PGA Tour schedule. No tournament has surrendered more under par rounds over the last five years than this one. The fairways at the Nicklaus course are among the easiest to hit all season long. The dormant rough is cut at a maximum length of two inches, with one of the courses cut down even shorter than that. You miss the fairway last week, no big deal. You miss the fairway this week at Torrey Pines, where the rough will be cut between 3 and 3.5”, it’s a much bigger deal.

Finally, the greens at the AmEx are setup among the slowest all season long. In a monthly newsletter issued to all Tour members, the agronomy preview for last weekend’s event declared the greens would Stimp at around 11 feet. Only a handful of events will aim for something slower than that. Again, at Torrey this week, where those bumpy poa annua greens reign supreme, the greens are intended to run 12.5 on the Stimp. In other words, even the “putting contest setup” that Rahm was complaining about was going to be easier than most weeks.

So when Rahm says what he said, what is it actually an indictment of? Frankly, he’s calling the setup plain. He’s saying it lacks in creativity and firmness, the things that require players to think, and think hard, on the tee, in the fairway, etc. When the accuracy of your tee-shots doesn’t matter much for reaching the green, and your ability to work the ball each way is less imperative to holding greens, most pros are going to have an easy time getting to the point of a putting contest. Without Strokes Gained at our disposal, it may be cherry-picking the stats a bit, but the champion Hudson Swafford finished T37 in fairways hit and T21 in greens in regulation. That’s the kind of golf you need to contend, from which point the difference becomes … a putting contest.

On the weekend, of course, Swafford shot up the leaderboard thanks to 304 feet of putts on Pete Dye’s Stadium Course, the second-best total on that course all week. Rahm might have a point, after all, even if it’s tough to prove. Tournament organizers could also say, What did you expect?