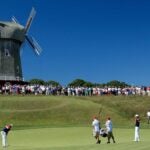 Fans take in the action at the 2013 Walker Cup at the National Golf Links of America.

If you think that being an amateur golfer means missing three-foot putts and not accepting prize money, think again.

As part of an ongoing effort to modernize the Rules of Golf, the USGA and the R&A unveiled proposals Monday for significant modifications to the Rules of Amateur Status that govern the game around the world.

Among the key changes: amateur golfers would be allowed to collect up to $750 in prize money without losing their status. Accepting sponsorships would also be fair game.

The overarching goal of the proposals, the governing bodies said, is to reaffirm the importance of amateur golf to the vitality of the game, and to help clarify what distinguishes amateurs from pros.

“Golf is unique in its broad appeal to both recreational and competitive golfers,” said Craig Winter, USGA senior director, Rules of Golf and Amateur Status. “We understand and value how important amateur status is, not only to those who compete at the highest level of the amateur game, but for millions of golfers at every age and skill level who enjoy competitive events at their home course. These updates should help simplify these Rules and ensure the health of the amateur game.”

Under the proposed changes, the Rules would identify just three no-no’s that would cost a golfer their amateur status: accepting prize money in excess of the $750 limit; accepting payment for giving instruction; and accepting a job as a golf club professional or membership of an association of professional golfers.

In addition, the new Rules would eliminate the distinction between cash prizes and other prizes, such as merchandise credit, a change that would give tournament organizers greater flexibility in how they dole out winnings. The new Rules would also do away with restrictions surrounding long-drive events, putting tournaments and other skills-based competitions that are not part of a “tee-to-hole” competition.

Together, the proposals represent the latest wave of updates in a modernization initiative, launched in 2017, aimed to bring the Rules of Golf more closely in line with how the game is actually played today. Having simplified a host of other guidelines, such as how to take drop or handle a lost ball, the governing bodies are now out to clear up gray areas in the current Rules that have raised concerns around amateur status, especially in the elite ranks of the amateur game.

Take the case of amateurs who aspire to be professionals. These players often find their status jeopardized by their participation in prize-money events that are important for their development but which otherwise have no impact on the amateur game. The new Rules would give those players greater opportunity to take part in such competitions without risking their amateur status. Similarly, the cost of travel, tournament entry fees and other expenses prohibit many amateurs from competing in events. By allowing amateurs to accept sponsorships, the new Rules would lower that barrier to entry.

While rulings in professional golf attract far more publicity, questions around amateur status sometimes make headlines, too. In early 2019, for instance, the 16-year-old amateur standout, Lucy Li, came under scrutiny after she appeared in an advertisement on social media for the Apple Watch. After assessing the situation, the USGA determined that Li had violated the amateur rules but did not strip her of her amateur status. Under the new rules, there would be no restrictions on how a player covers expenses, including money earned through promotions or advertisements.

The proposed rules, along with explanations of the key changes, have been posted on the USGA and R&A’s websites. As they have with other proposed updates to the Rules, the governing bodies are inviting public feedback. Comments will be accepted through Friday, March 26, with the new Rules slated to go into place on Jan. 1, 2022.

How much water should you *really* bite off on a par-5? Follow these 4 tips