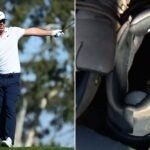 Brooks Koepka found himself in a peculiar situation during the second round of the Farmers Insurance Open as his tee shot came to rest inside a shoe.

Brooks Koepka found himself in a peculiar situation during the second round of the Farmers Insurance Open on Friday. After smashing is drive wide of the fairway on the par-4 16th hole at Torrey Pines’ North Course, Koepka found that his ball came to rest inside a shoe.

Although there are no galleries this week in San Diego, media, essential workers and other personnel are still wandering about the course. Among these stragglers are the dedicated cameramen who bring the action to your TV screens each week. Enter the mystery shoe.

It appeared Koepka’s wayward drive found the inside of a cameraman’s spare boot on the back of a cart parked in the rough. And while the classic golf film Happy Gilmore might have you believe otherwise, there is relief available when a ball comes to rest in such an obstruction.

The ruling is covered under Rule 15.2a in the Rules of Golf, which states, “You may take free relief by lifting your ball, removing the movable obstruction and dropping your original ball or another ball.”

Since Koepka’s ball came to rest in an immovable obstruction, he was entitled to a free drop within one club length of the reference point. Although that was the case, he wasn’t so keen on retrieving the ball from its resting place.

“I ain’t sticking my hand in there,” Koepka said. “You can grab it out of your nasty-a** shoe.”

After the cameraman returned the ball, Koepka was able to salvage what is surely one of the strangest pars of his career.

Tiger Woods faced a similarly odd situation at the Genesis Invitational just last year, although his ball found the bottom of a trash can. Another notable example of this ruling occurred on the Korn Ferry Tour in 2017. Making his professional golf debut, basketball star Steph Curry hit his opening tee shot of the Ellie Mae Classic into the cup holder of a cart.

Once again Rule 15.2a was invoked and a free drop was awarded.

Next time your ball finds a precarious resting place, remember Rule 15.2a. It might just bail you out of a jam.