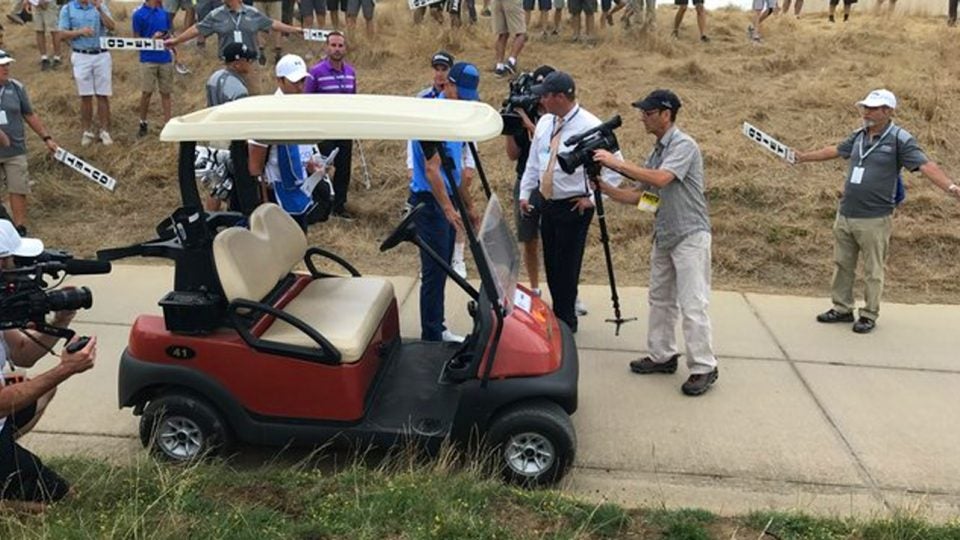 Curry's first drive of the day ended up in a very unlikely place.
@ESPN_Caddie (Michael Collins)

After much hype and speculation, Golden State Warriors star Stephen Curry finally made his pro golf debut Thursday at the Web.com tour’s Ellie Mae Classic, but alas his first shot in a pro event did not go according to plan.

Starting on the 10th hole at TPC Stonebrae in the San Francisco Bay Area, Curry was surrounded by such large crowds it looked more like a U.S. Open at Pebble Beach than a run-of-the-mill Web.com tournament, as you can see in the video below shot by San Francisco Chronicle sportswriter Ron Kroichick. (You can follow Kroichick’s updates on Twitter at @ronkroichick.)

This is the crowd following @StephenCurry30, on Thursday morning at https://t.co/gZ56s2K2Mk event. No way this is bad for golf pic.twitter.com/GtHDNdCgeh

While the two-time NBA champion rarely looks stressed on the basketball court, the extra pressure seems to have gotten to Steph. Curry hooked his first tee shot left into the gallery and, believe it or not, his ball came to rest inside a cup holder in a golf cart.

OF COURSE his first shot would find the bottom of a cup… holder in a golf cart left!!… https://t.co/CjdmPzYxgY pic.twitter.com/O5XuVSnQNt

Of course @StephenCurry30 first tee shot of @elliemaeclassic swished the bottom of the bucket! Of a golf cart! @WebDotComTour #freerelief pic.twitter.com/zgq2OHNwkL

Still, Curry recovered nicely. His third shot went over the green, and then he nearly chipped in for an all-world par save, settling for a bogey. He went on to par the next two holes before adding a second bogey at the par-4 5th hole. Check out Curry’s solid chip below.

Great chip shot by @StephenCurry30 leads to tap-in bogey. Nice save, could have been much worse after hooked drive. @WebDotComTour pic.twitter.com/01B24AKfYd