Sergio Garcia reveals the reasoning behind his odd putting trick 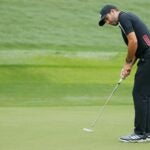 Sergio Garcia has been putting with his eyes closed as of late.

To say Sergio Garcia has struggled since his 2017 Masters victory would be an understatement. Since slipping on the green jacket, the 10-time PGA Tour winner has zero victories, just 10 top 10s and has missed nine cuts in 13 major appearances. He’s become much of an afterthought in the pro ranks as he’s dropped outside the top 50 in the world as he struggles to find his old form.

But at the Sanderson Farms Championship, the Sergio of old has made an appearance through 36 holes. At eight under through the halfway point, Garcia is just five shots back and is in prime position to make a weekend charge. He’s been deadly off the tee thus far, leading the field in SG: Off-the-tee, but his putting has been what’s intriguing. During his press conference after Round 2, it was brought up that Garcia has been putting with his eyes closed.

“Would you believe me if I told you I’ve been doing it for about three years?” Garcia asked. “(At) Augusta I won it playing with my eyes closed every single putt and some of the other wins, too.”

Thanks to some reporting from GOLF.com’s very own Luke Kerr-Dineen, we can verify that Garcia has been using this method since at least 2019, and likely much longer if we believe the Spaniard’s words. The change came about one day when Garcia was practicing. He tried the eyes-closed method and realized it helped his game, so it stuck.

“I would love to putt with my eyes open, but I feel like my stroke is more consistent when I kind of try to forget about it and just kind of feel it,” he said. “I’ve tried to putt with my eyes open again here and there and I tried it at the U.S. Open a couple weeks ago, obviously didn’t work very well, I tried a couple other weeks, and I seem to lose a lot of consistency on it.”

Consistency is something Garcia needs on the greens. He hasn’t finished inside the top 100 in SG: Putting in six years, and the last time he was inside the top 50 was in 2013 when he finished 10th. Closing your eyes when putting might seem odd, but if it can make him more comfortable on the greens, he should pursue it with vigor, which he made clear he will continue doing.

“I’m going to do whatever I feel is best for me,” Garcia said. “The only guy I have to please is myself and my fans. Whoever doesn’t like it, it’s okay. It’s their problem.”