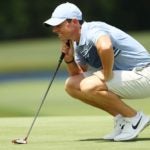 These three tips will have you holing more short putts in no time.

Although short putts can seem simple, holing them with consistency can be a challenge. Plenty of recreational players don’t even putt these short ones out as they are “gimmes,” but really, they are anything but automatic. If you play out every hole by the Rules of Golf, you’ll quickly learn that those putts you’ve been conceding have a different feel when the pressure is on.

If you can consistently make these short putts, however, you’ll have a firm leg up against your competition. Establish a solid routine to execute under pressure and these putts will actually become “gimmes,” though this time you’ll still be playing within the rules. In a recent Instagram post, putting guru Phil Kenyon laid out three simple steps for putting inside five feet. Check them out below.

1. The line shouldn’t be much more than a cup outside the hole

When you approach these short putts, don’t get too infatuated with the slope of the green or grain of the grass. Although these factors will affect the ball, when you’re so close to the hole they will never be severe enough to play the break more than a cup outside the hole.

2. Have a narrow and external target

Pick out something small, such as a blade of grass, and try to roll the putt over that spot. Don’t think about stroke or feel or anything internal, just worry about the external target you’ve selected.

3. Listen for the ball to hit the hole

This is another way of saying keep your head down. Too many times on the short putts players will prematurely lift their heads to watch the ball. But on such a short putt, there’s no reason to watch the ball after it’s hit. Just stroke the ball and wait to hear it rattling into the bottom of the cup.