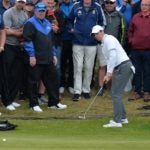 When it's the simplest play, Rory McIlroy putts from off the green.

At Bay Hill this year, Rory McIlroy mentioned that he would consider putting out of the bunker behind the 18th green. If it’s good enough for the No. 1 player in the world, it should be enough for you — right? Yet golfers around the world regularly underutilize the simplest club in the bag.

McIlroy’s shot was relatively unique, but he raised a common dilemma: From off the green, do you chip or putt? It’s highly personal, but here are four rules to stand by.

1. A bad putt is generally better than a bad chip.

This is an age-old golf saying that has the benefit of being true. Pulling out a lofted wedge introduces the chance for a chunk, skull or shank. The flatstick will keep you disaster-free, which is the most surefire way to keep scores down

2. If you’re chipping, you’d better have a reason.

Is the lie too sticky? Is there rough between you and the hole? Is the ground too sketchy to roll on? Would putting bring tricky slopes into play? Are you playing against the grain? If you answered yes to any of those questions, chipping might be a good idea. But putting should be your default.

3. Putting from off the green is an acquirable skill.

One common refrain for golfers who prefer to chip is that they’re not used to putting from off the green. Well, try it out! Hit some practice putts from the fairway. Putt on tee boxes while you’re waiting for the group ahead. Think of these surfaces as just slow greens. Your brain can adjust faster than you think.

4. It’s not always an either/or decision.

The beauty of this game — heck, this world! — is that it isn’t all putts and flop shots. If you want it to carry over some rough but want it to roll like a putt, try an 8-iron. And if you won’t listen to McIlroy, at least listen to Occam: The simplest solution is almost always the best.

Check out the handy graphic below for more.

Tightly mowed grass, like No. 14 at Trinity Forest in Dallas, is the perfect chance to use your putter from everywhere.A bad putt probably still gets you on the green.

1. A bad chip could leave you with another chip — or in the woods.

4. If chipping simplifies your shot, it’s probably the right call.