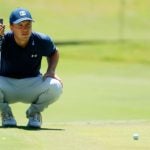 Since Jordan Spieth first came onto the PGA Tour, he has been one of the best putters in the game. Spieth has ranked inside the top 10 in SG: Putting three times (2015, 2016, 2019) since his rookie season in 2013, and has just once finished outside the top 60. Even as he has struggled in other areas of his game lately, his putting has — statistically speaking, at least — continued to be a solid foundation in his overall game.

That prowess with the flatstick is no accident, either. It’s something that he has drilled over countless hours since his junior days, working to become one of the most efficient putters of his generation. Recently, on Corey Lundberg and Cameron McCorrmick’s “Earn Your Edge” podcast, Spieth shared his putting practice routine for a glimpse into what a top putter does during his sessions.

Spieth said he starts with an average of 20 straight putts. He typically does this with the Dave Pelz putting tutor and putting rail, focusing on getting his start lines just right.

“One, you know that you’re square so you can kind of get your eyes calibrated to where that putter is,” Spieth said. “If I’m starting it on line the first six inches, it’s going to be starting on line. My stroke is not going to hook or cut enough where I’m presenting any problems after that.”

Spieth starts with putts that are anywhere from six to eight feet using his training aids to make sure he’s got his start lines dialed in. If he doesn’t start the ball on the correct line, it’ll never have a chance of going in.

Spieth then does putting drills from between four and nine feet around the hole. He works on putts from those various distances north, south, east and west around the hole so he gets work in on all types of breaks (uphill, downhill, left-to-right, right-to-left). From every distance he sets a number of putts he has to make before he moves on.

He then backs up to 10 feet from the hole in that same circumference. Spieth makes this portion of his practice routine into a game for some added incentive. At each station, he has to be four under or better on 10 putts. If he leaves the putt short or hits it farther than two feet past the hole, it’s a bogey. A putt that misses passed the hole but within two feet is a par, and a made putt is a birdie.

Spieth places two ball markers a putter head’s width apart at a mid-point of the putt. This drill is done on mid-range putts, anywhere from 10 to 25 feet.

“I’m finding the mid-point, which is not only training how I’m reading the greens, but now it’s, ‘Is this the speed that’s necessary to hit it to the front of the hole and not go more than two feet by?’” Spieth said.

Sometimes, though, he will make the putt but miss the gate on his first few putts. This tells him that his green reading is slightly off and he needs to recalibrate. If he’s making it through the gate and making putts, then he knows he’s dialed in.

To wrap up his routine, Spieth goes through the ladder drill. He’ll set up a series of balls going back all the way to 15 feet with the goal of either making them or, if they miss, leaving them no more than two feet past the hole. It’s a drill that he uses often, and in preparation for the 2015 U.S. Open at Chambers Bay, it was a key to victory.

“We went out to like 58 feet,” Spieth said. “That’s about as dialed in as I ever remember being.”