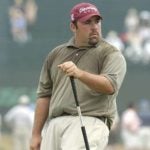 Kevin Stadler was right in the mix after firing 68-72 during the first two rounds of the 2004 U.S. Open at Shinnecock.

Just how tough was the 2004 U.S. Open at Shinnecock? Longtime Tour pro and 2014 Waste Management Phoenix Open champ Kevin Stadler qualified for the now infamous Open, which is best remembered for playing conditions that were so firm and fast that the course — particularly the 7th green — became virtually unplayable. Stadler recounted the harrowing experience to Colt Knost and Drew Stoltz on this week’s GOLF’s Subpar podcast.

“I was a fish out of water,” Stadler said. “I was 24 years old. I was living on an air mattress [in Arizona] playing a mini tour and I qualified for the U.S. Open.

“That was one of the first big-big tournaments I’d ever played. It was awesome. Shinnecock that week, from that Sunday [before] through the Friday, was still, to this day, the purest golf course I’ve ever seen. It was in absolute perfect shape, could not be better.”

Unfortunately for Stadler and the rest of the week’s competitors, course conditions took a controversial turn for the worse on the weekend.

“I shot 68-72 the first two rounds, was even,” Stadler continued. “I had like a 2 p.m. tee time on Saturday. It was a nightmare. I was so nervous. We drove up to the golf course, and there were caddies on the putting green as we were driving in to the parking lot that were throwing balls on the ground and they were bouncing up 20 feet over their heads. I had never seen anything like that. I literally didn’t even know what was going on.”

One particularly cruel moment for Stadler was during Sunday’s round.

“I think it was 7, the par-3, little Redan green — the pin was front left,” Stadler said. “It was just browned-out, impossible, rock-hard.”

Stadler hit his tee shot in the bunker and hit a magnificent shot to two feet. Easy up-and-down par, right? Not so fast.

“I’ve got a two-footer that’s probably a cup out left if you’re gonna baby it, or just rip it in, and I didn’t have the balls to rip it in, so I’m just going to tap it over here to the left,” Stadler recounted. “It trickled out on the high side, and I’m waiting to tap it in and it just keeps on trickling. And it goes back in the bunker. They started watering [the green] after our group.”

Stadler shot 82-85 on Saturday and Sunday — a whopping 27 over par. Retief Goosen won that year with a four-round total of 4 under. Stadler, at 65th, was among 11 other players who finished 20 over par or worse.

You can watch Stadler’s complete SubPar interview below.