‘I tend to only spew facts’: Phil Mickelson gets in Twitter science feud to help famed golf instructor 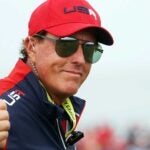 Phil Mickelson knows what he's talking about, and he has the scientific studies to prove it.

If you’re a high-profile member of the golf world, any tweet you make could be pounced upon by the reigning golf Twitter champion: Phil Mickelson. And if you reply to one of Phil’s tweets with some salt, be prepared for a response from Lefty himself, no matter who you are.

Mickelson is not the most prolific Twitter user on Tour, but he doesn’t shy away from mixing it up in the replies. If he’s not playing golf, there’s a good chance he’s cruising the timeline, looking for his next opportunity to jump into the conversation and drop some knowledge.

On Tuesday, legendary golf instructor Peter Kostis unexpectedly caught Phil’s attention with a tweet about swing training. It was a bit of a role reversal for Kostis, in that he was requesting help with a golf mechanics question, instead of dishing out the tips himself.

Kostis was mystified by non-dominant swing training, where golfers practice swinging from their weak side to improve their normal swing, writing, “someone has to explain the science behind non-dominant swinging improving dominant swing speed. Making my car go 0-60 in 4 sec. in reverse, doesn’t make [it] go faster in drive.”

Dr. Mickelson was more than happy to assist.

Two hours after Kostis posted his original tweet, Mickelson responded, and not with his customary jokes or sarcasm, but with pure science, writing, “Your body won’t accelerate faster than it can stop. Accelerating the opposite way strengthens the decelerating muscles in your normal swing. This will raise your body’s internal governor allowing you to swing faster.”

Unsatisfied with his own explanation, Phil expanded on the idea with another reply, “A race car’s top speed has a lot to do with its breaking system (not it’s ability to go fast in reverse) The human body’s ability to create speed is dependent on it’s ability to slow down and stop as well. Another way to think of it.”

That’s when a third-party tweeter entered the fray, challenging Phil’s theory and questioning his scientific credentials. As any good scientist would do, Phil clapped back with a footnote, referencing the studies where he got his information, and closing with, “I tend to only spew facts.”

That’s when well-respected golf biomechanist Dr. Sasho Mackenzie offered up his own explanation.

Whether or not there’s a golf lesson to be learned here is unclear, though Mickelson, who is a natural righty but plays golf lefty, is clearly a supporter of non-dominant swing training.

The Twitter takeaway is clearer: when faced with a roving Mickelson in your replies, tread carefully.