This is why right-handed Phil Mickelson swings lefty (should you do the same?) 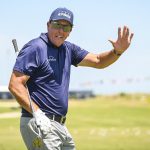 No, you should not.

You’ve probably heard it before about how Phil Mickelson became Lefty. Or maybe you haven’t! In which case, the story goes like this: Phil Mickelson Sr. was practicing his chipping in the back yard when his son and future six-time major champ picked up a golf club and started swinging — left-handed.

The legend goes that Phil was trying to be a “mirror-image” of his right-hand swinging father, so even though he does everything else right-handed, the lefty swing stuck.

Which made me wonder: Is there something we can learn from the story?

The idea that right-handers should actually swing lefty is hardly a new one; it’s been kicking around for a while. There have been all manner of opinions on it, including the idea that golfers ideally should swing in the opposite direction of their dominant hand. To get a quick tune-up on the idea, I called up GOLF Top 100 Teacher Terry Rowles. Rowles dismisses the idea of right-and-wrong in the golf swing; instead, he believes different types of swings based on people’s unique bodies. Phil Mickelson aside, he’s not sold on the idea that right-handers should swing lefty, or vice versa.

If you’re a right-hander who swings lefty, your stronger right arm becomes your lead arm, which can create issues.

“Playing the other way around will make it harder to release the club, because your lead arm is stronger,” Rowles says, citing Spieth, who plays baseball left-handed but swings a golf club right-handed, as another example. “Jordan Spieth is the other way around…they tend to hold their angle [between their wrists and arms] for longer as their stronger lead arm is pulling the club down.”

When your stronger lead arm prevents the clubhead from releasing, it leaves the clubface more open and can cause the club to steep like Phil’s — which, for the average golfer who doesn’t have as much hand-eye coordination. It can also be the cause of your golf swing’s chicken wing — all of which is a recipe for a slice.Many more accomplished right-handed Lefty’s match-up this release with a stronger grip.

But as for switch-hitting being a solution to your problems? Or a better way to start the junior golfer in your life on the game? Rowles isn’t convinced.

“Personally, I wouldn’t try it,” he says.