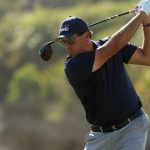 Phil Mickelson was in the zone last week at the Ocean Course.

Phil Mickelson had an historic run at last week’s PGA Championship as he became the oldest major winner in golf history. And in recognition of his epic achievement, we’ve got a special, Lefty-centric edition of Teachable Moments. Here’s what you can learn from his play last week on Kiawah Island.

How one swing thought changed Mickelson’s final round

After three rounds of impressive ball striking, the first six holes of Mickelson’s final round were a bit on the wild side. He made three bogeys over those first six holes with a combination of wild drives and loose iron play. And his eccentric play had him deadlocked in a battle with macho man Brooks Koepka. But then he got a pep talk from his caddie/brother, Tim.

“He pulled me aside and said, ‘If you’re going to win this thing, you’re going to have to make committed golf swings,'” Mickelson explained. “It hit me in the head. I can’t control the outcome. I have to swing committed … From there on, I hit a lot of really good shots because I was committed to each one.”

On his next swing from the 7th tee, Mickelson bombed a drive down the center of the fairway and put himself in position to make a birdie and retake the lead. It was a margin he never relinquished for the rest of the day.

In high-pressure moments, it’s easy to try to steer the ball toward the target with passive swings, but as Lefty showed, that won’t do the trick under the gun. Instead, it’s crucial to stay committed and have confidence in each and every swing.

Mickelson’s swing might not be one that you would teach to a beginner just taking up the game, but it has been incredibly effective for him over the course of his 30-year career.

“On paper it’s not that great, to be honest,” said GOLF Top 100 Teacher Jonathan Yarwood. “But there are some really great aspects to it that make it work. He’s probably the most talented person of his generation in my opinion”

The biggest key to his swing? Incredible hand-eye coordination. You’ll notice that many of the positions Mickelson gets into throughout the swing are not what would be considered “textbook,” but thanks to his elite hand-eye coordination, he’s able to manipulate the club on the downswing and square up the face.

Another key to Lefty’s swing is his footwork. He lifts his front foot in the backswing to create a massive turn and generate immense power, and then he slams it back into the turf on the way down.

“To get rid of this flip that he’s got, he’s recently started moving out of the way, a bit like Bryson DeChambeau,” Yarwood said. “[He’s] figured out that if he shifts out of the way and rotates better, he’s going to get more vertical force, more speed. The lead side is going to be pulling his arms, so his arms don’t have to correct the club quite as dramatically.”

The secret to Phil’s improved mindset

All week, Mickelson spoke about how an improved ability to focus was key to his excellent play. One of the ways he’s done that is using a practice routine focused on playing 36 or even 45 holes in a day in order to train his mind to focus for sustained periods.

“I’m just making more and more progress just by trying to elongate my focus,” Mickelson said. “I might try to play 36, 45 holes in a day and try to focus on each shot so that when I go out and play 18, it doesn’t feel like it’s that much … I’m trying to use my mind like a muscle and just expand it.”

After his win, Mickelson also alluded to a spiritual breakthrough that has assisted in improving his mindset.

“Just the ability to kind of quiet my mind and get rid of all the exterior noise,” he said. “That’s kind of been the biggest thing for me.”

Those two ingredients seem to have led to a recipe for success.