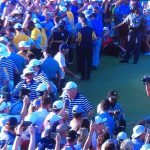 Brooks Koepka emerges from the crowd on the 18th green at the Ocean Course at Kiawah Island.

Brooks Koepka, while playing the 18th hole during Sunday’s final round of the PGA Championship, hit his second shot safely onto the green.

But his walk to his ball, he says, was anything but OK.

As he and playing partner Phil Mickelson, the leader by two strokes, made their way up the final hole at the Ocean Course at Kiawah Island, thousands of fans swarmed the players. Most were congratulating Mickelson, who at 50, was minutes away from becoming the oldest player to win a major. Some, Koepka suggested in his post-round interview, were targeting his surgically repaired right knee.

“I don’t think anybody really understands until you actually you’re coming out of surgery how — I mean, even when I was doing rehab and there’s five people kind of standing by your knee, you get a little skittish.

“Like I don’t mind waiting or being in that crowd, but getting my — I don’t know, it felt like somebody tried to, I don’t know what the deal was, but it’s what it is. Be putting it in ice today. It feels like s— right now.”

As he and caddie Ricky Elliott navigated their way to the green, Koepka said his knee got “bumped a few times.”

In March, Koepka had surgery to fix a dislocated kneecap and ligament damage and didn’t play the entire month, then appeared at the Masters, only to crouch awkwardly on the greens so he could limit the pain as he read putts. He missed the cut there and did again last week at the Byron Nelson, which until this week had been his only other start since surgery. The procedure followed previous work on his left knee.

The enveloping crowd was reminiscent of Tiger Woods’ win at the 2018 Tour Championship, where thousands walked up the 18th hole at East Lake Country Club on Woods’ way to victory.

“Yeah, it’s cool for Phil. But getting dinged a few times isn’t exactly my idea of fun.”