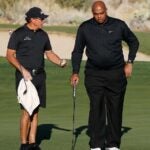 Phil Mickelson was full of tips for his partner during The Match 3.

With Phil Mickelson teamed up with Charles Barkley during The Match: Champions for Change, he turned into part coach, part caddie for the NBA Hall of Famer. There were few shots hit by Barkley where Mickelson didn’t have some sort of tip or advice, and the strategy seems to have worked as the duo won 4 and 3.

And while Mickelson’s tips were directed toward his partner, there is plenty you can take away and apply to your own game. Here are the three best game-improvements tips from Mickelson during The Match. When in doubt, go long

Right out of the gates, we got a subtle tip from Mickelson. It was more of a course-management tip than a game improvement one, but it’s something many amateurs can learn from.

As Barkley lined up for a flip wedge into the 1st green, Mickelson told him he had 70 yards to the flag. Little did Barkley know the distance was actually 55 yards. Barkley (predictably) hit the ball long, but that was by design.

Mickelson explained that with trouble short and a front pin, he gave Barkley a longer yardage to make sure he got the ball to the hole. Most amateurs leave their approach shots short, so by playing the ball 15 yards long, it took the possibility of trouble out of play.

Too many times, recreational players play for their perfect yardage instead of their most likely one. Once you start playing the yardages in a smarter way, you’ll save several shots per round.

Playing with the ball above your feet

Mickelson gave a tip based on his own game on the 4th hole. The ball was above his feet, and he hit a terrific shot into the green from the rough. It prompted Michelle Wie-West to ask what Mickelson’s swing thought was, and he provided some terrific insight.

“Rather than trying to offset the slope, I just went with it,” Mickelson said.

With the ball on a slope, it can be easy to think you need to offset the effect of the slope, but as Mickelson showed, it can be more effective to use it to your advantage. Instead of fighting the natural shape, just go with it for a more predictable shot shape.

How to hit a cut

With a wedge in his hand on the par-3 6th, Mickelson pulled a sand wedge for the 120-yard shot to a left pin. He explained the club likely had too much distance for the shot, but he planned to offset it by playing a cut.

He aimed right of the flagstick and shaped the ball from right to left toward the pin, finishing pin high. In order to produce the cut spin, he said he got “wide on the downswing” so he could hit the outside part of the ball. Next time your shot calls for a fade, keep this “wide downswing” thought in your head so you can hit the outside of the ball and produce a cut.