The coldest winter Michelle Wie ever spent was a recent afternoon in San Francisco, when she went for a hike in sweatpants and a matching sports bra. A warmer outfit might have been the wiser choice, but Wie likes looking stylish while she gets her steps in, and the city’s fickle weather — sunny, rainy, foggy, sunny — had tricked her into thinking she had a window.

No sooner had she reached the summit of her route — a hilltop park with views that reached beyond the Golden Gate — than the wind kicked up, a mist began to fall and the skies took on the dark shade of a grim day at Carnoustie.

“Dang,” Wie said, wrapping her arms around her bare shoulders. “What is this, Scotland?”

She could have been forgiven for wondering where she was. The past few days had been a blur of travel, taking Wie from Singapore to Seoul, then on to Atlanta, Orlando and New York and, finally, a night flight to San Francisco — a whirlwind made more dizzying by the good-news-bad-news that swirled around it. 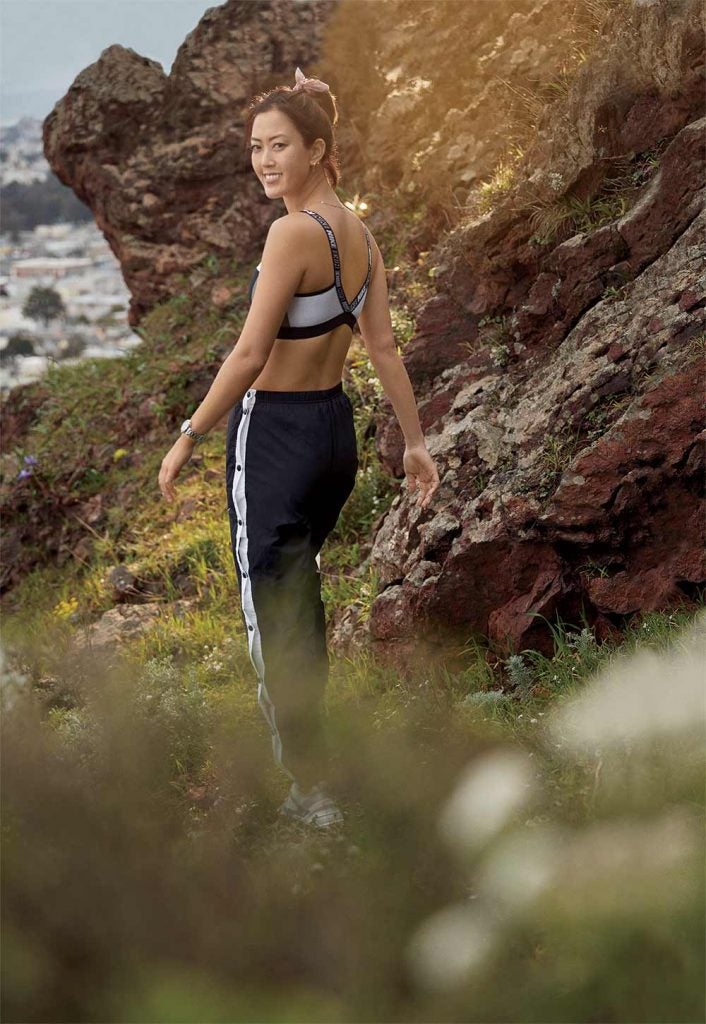 In the spotlight since a young age, Wie has learned of life's ups and downs.
Dewey Nicks

It began with Wie’s withdrawal from her defense of the HSBC Women’s World Championship, in Singapore, a deflating development brought on by pain in her surgically repaired right wrist. “Absolutely gut-wrenched,” Wie wrote on Twitter of having to cut short a comeback she had launched only a week before.

Relief came in New York, where doctors assured her that she had avoided serious damage. It was merely inflammation; she just needed rest, and — more good news — some downtime was slotted in her schedule anyway.

Even better, her R&R was slated for the Bay Area, home not just of Stanford, Wie’s alma mater, and many close acquaintances who aren’t her surgeons, but also to Wie’s new beau, Jonnie West, son of basketball icon Jerry West.

Romance and relaxation. Wie had that going for her, which was nice. It helped make up for the fact that she couldn’t swing a club and that her clothing, at the moment, wasn’t suited for the weather. Wie was shivering now, but appeared unbothered. Sunshine comes and goes. Life brings ups and downs. As Wie has come to learn, what counts is not the forecast. It’s how you handle whatever blows your way. (Her latest blow came on Tuesday, when she announced she needed to “take some time away” to allow her hand to heal.)

“When I was young, I used to think of life as this constantly upward trajectory, and then when something happened, you’d get shocked by the downturn,” Wie says. “I know now that you have to expect the unexpected, so I’m just trying to take things day by day.”

When Wie speaks wistfully of her youth, you almost forget that she’s only 29. You’re also reminded of the way time warps around lives lived in the public eye. To golf fans, it can seem that Wie has been around forever, a view skewed by a childhood vault to stardom that saw her, at age 10, become the youngest player ever to qualify for the U.S. Women’s Amateur Public Links Championship. So much back then transpired in such rapid-fire succession — youngest player to qualify for an LPGA event, youngest player to win a USGA adult event, youngest female to compete in a PGA Tour event, and on — that the timeline grows distorted in Wie’s own mind. 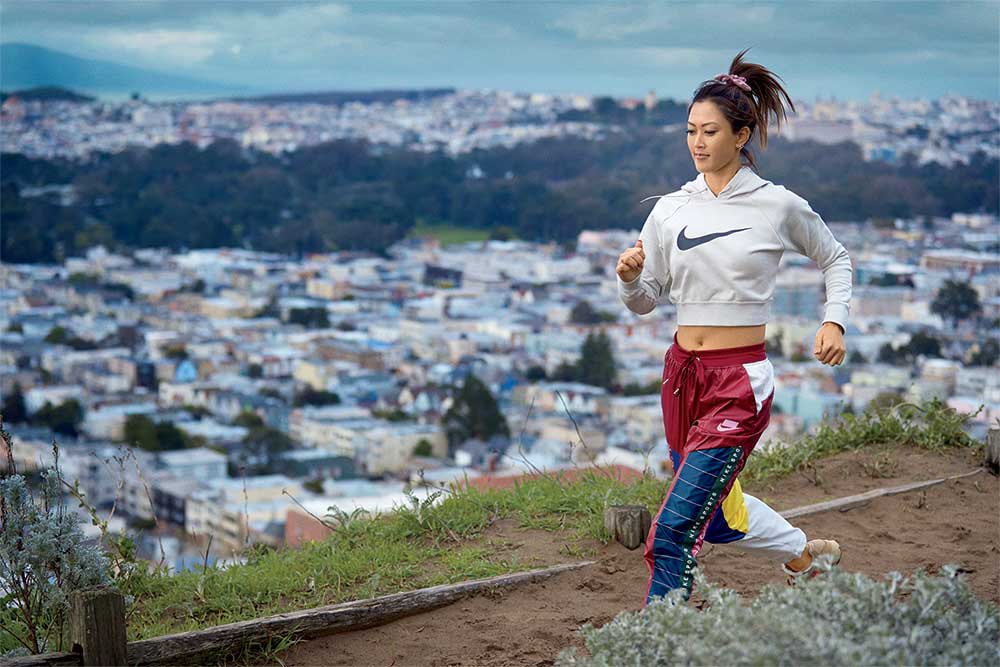 Even in her workout gear, Wie always shines.
Dewey Nicks

“When I think about the Public Links, it’s almost like it was yesterday, just a blink of an eye,” Wie says. “But then I’m like, wait a minute, I really have been out here for a while.”

Like many former prodigies in early adulthood, Wie can come off as both youthful and mature, at once a seasoned veteran and a wide-eyed innocent. A major championship – winner and five-time Solheim Cupper with wide-ranging interests that include painting, cooking and travel (and a medical chart to rival that of Tiger Woods), Wie is also something of a teen-bopping goofball: prone to uptalk, big on heart-shaped emojis and unabashed in discussing her “obsession” with barrettes and hair-scrunchies. In the same way, the girly-girl in her coexists with a rough-and-tumble tomboy, a fitness fiend and lifelong jock who excelled at tennis before she took up golf and played a booming baseline game that was hard to beat. Though Wie is well past playing in PGA Tour events, she pegs it regularly with Tour pals like Rickie Fowler and more than holds her own. Like Woods in the men’s game, Wie became the prototype for a new breed of female Tour pro, more outwardly athletic and aerobicized, with swing speeds and carry-distances to match.

But don’t underestimate her skills as a couch-potato either. The Netflix binge-watcher and avid stay-cationer are just two of the many sides of Michelle Wie that the public hasn’t always had a chance to see. 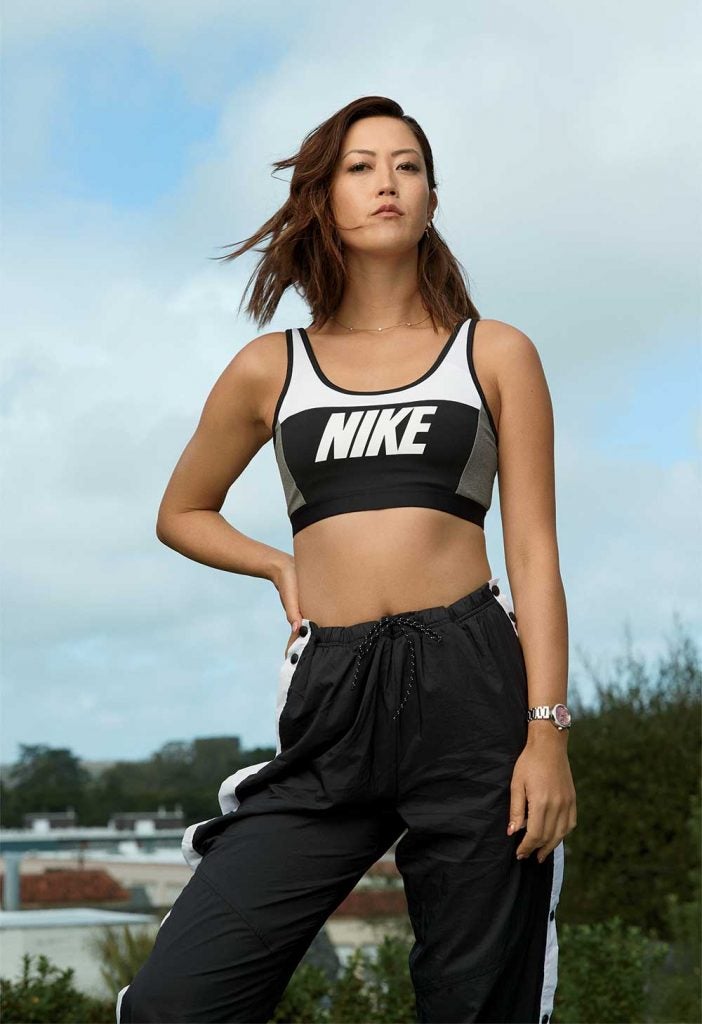 “Michelle has always been a very curious and cultured person, a Stanford grad and, obviously, an incredible talent, but also totally down-to-earth,” says Wie’s close friend and former LPGA Tour pro Jeehae Lee, who remembers being intimidated when their paths first crossed in Q-school.

“She’s Michelle Wie. She’s a big deal,” Lee says. “But the second you get to know her, you see the kind of warm, generous and open person she is. I wanted to hang out with her even more than I did already, but she wasn’t even of legal drinking age.”

With her 30th birthday approaching in November, Wie now finds herself fielding questions that male Tour pros of her vintage almost never face. Has she thought of having kids? Pursuing other interests? Does she plan to be competing 10 or 20 years from now? Her answers: yes, yes, and who-the-heck-knows.

It's such a cool sport, but people stay away from it because they're intimated by it or they think it's overly serious or stuffy. And unfortunately, some of that stigma is based in truth.

She loves the game but doesn’t live and breathe it, at least not with a golf nerd’s white-hot intensity. She says she couldn’t tell you her smash-factor or spin-rate or, for that matter, which shafts are in her clubs. (“D2? D4? There’s all these different names. I just know which ones feel lighter.”) Until recently, she adds, she thought that all of Pebble Beach was “just one golf course,” that the Greenbrier was in Ohio (it’s in West Virginia), and that the Players Championship and the PGA Championship were the same event.

“I just don’t know all that much about, like, golf stuff, to be honest,” she says. “When people would refer to ‘The Players,’ I thought it was just a cool slang term for the PGA.”

Such devil-may-care-ness contrasts with an image that dogged Wie earlier in her career, when she was often cast as a teen automaton, pushed too far, too fast by overbearing parents. Though Wie spent years outspokenly rejecting this portrayal, it wasn’t until the rise of social media that she says she felt empowered to set the record straight. On Instagram and Twitter, she controls the message. And judging by the photos she posts of herself — eating live squid, posing beachside in a bikini, cuddling with her fluffy lapdog, Lola — the message is that Wie is having plenty of fun, thank you.

There’s an arm’s-length intimacy to it all, of course. In January, Wie revealed on Instagram that she was dating West, but when asked how things are going, she smiles and says, “Oh, I think we’ll just stick to golf.” Less than a week later, she and West announced their engagement. 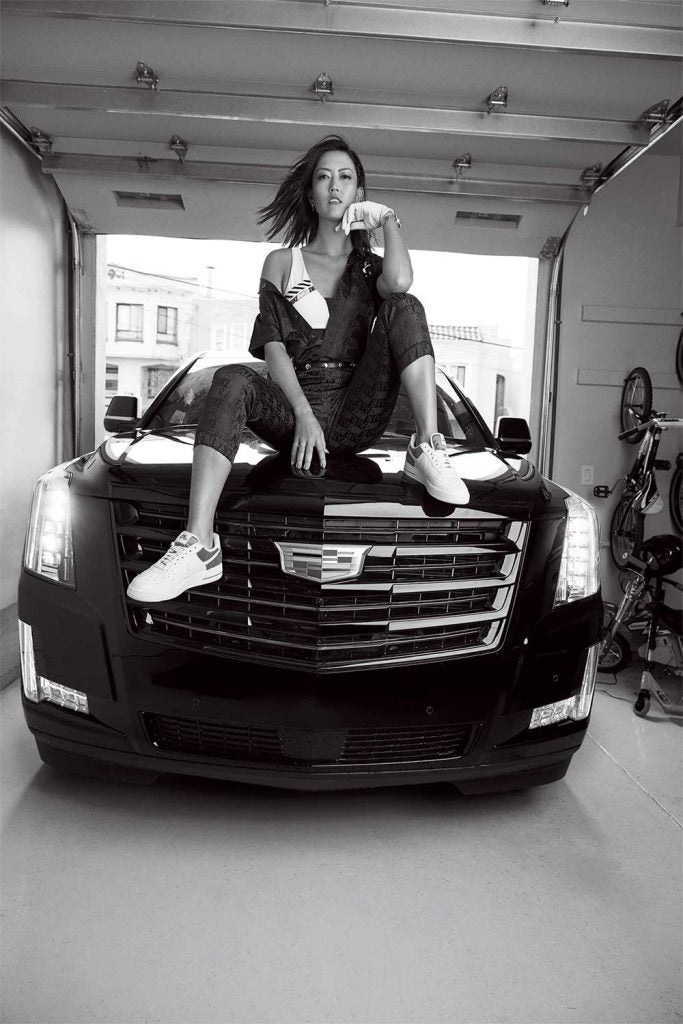 One solution Wie has to grow the game? Make more holes end by the clubhouse, giving golfers the option to play shorter — and quicker — rounds.
Dewey Nicks

For news about the private life of Michelle Wie, the best source the public has is @themichellewie. On many other subjects, the real Wie is forthcoming. Ask her about the future of the game she plays, and Wie becomes a wellspring of ideas and opinions. For starters, she believes that golf could take a page from her own playbook and do something to correct its reputation.

“It’s such a cool sport, but people stay away from it because they’re intimated by it or they think it’s overly serious or stuffy,” Wie says. “And unfortunately, some of that stigma is based in truth.”

One solution, she believes, is for golf to take a chill-pill by relaxing dress codes and other tired strictures. Wie’s own envelope-pushing outfits have helped advance this conversation but have also brought her warnings from the fashion police (although she has never been fined by the LPGA for a dress code violation, she has received more finger-wagging messages than she cares to count). Her intent, she says, is to look good and feel good without getting anybody’s knickers in a twist.

“You should always be respectful, but I do feel like some of my choices have been misunderstood,” Wie says. “If I wear a short skirt, it’s not because I’m trying to be revealing. It’s because I really don’t like the feel of a skirt breaking on my mid-thigh.” 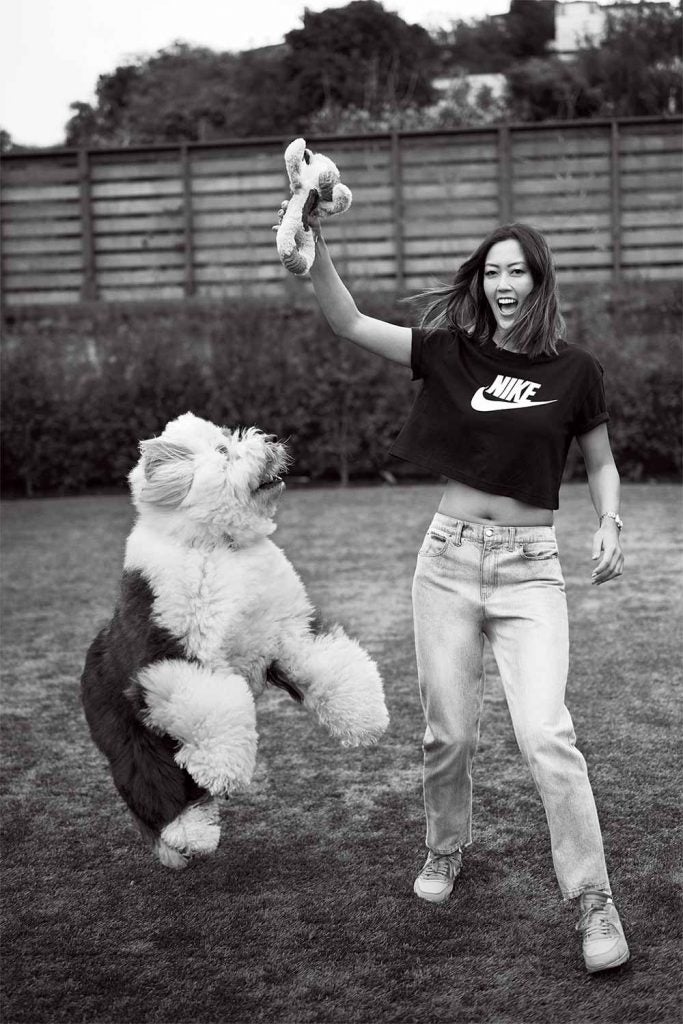 The other length that Wie feels strongly about is the length of time it takes to play a round. On the major tours, she says, she’d enjoy seeing a shot clock (“It would be pretty entertaining to see everyone squirm”). But recreational play could also use a jump-start, and Wie thinks that could come through course design. She and Jack Nicklaus have been in conversations about co-building a course, and though they haven’t found a site (Wie’s birthplace of Hawaii would be a natural location, as would Florida, where she and Nicklaus both live), Wie has clear ideas about the kind of place she would like it to be. No dress code. Dogs allowed. Walking-only. And a routing that returned to the clubhouse after the sixth, ninth, 12th and 18th holes.

“Most people are busy. You need to give them options and keep it relaxed and fun,” Wie says. “Personally, I love the nine-and-lunch.”

In a casual round, Wie says, “four hours is my limit,” which is longer than her patience for a cold-weather hike. On the San Francisco hilltop where Wie now stood, the British Open conditions showed no sign of letting up. Enough was enough. There was only so much Wie could sacrifice for fashion. From a tote bag, she pulled out a purple fur jacket and slipped it on. Never mind that it clashed with her sweatpants and sports bra. 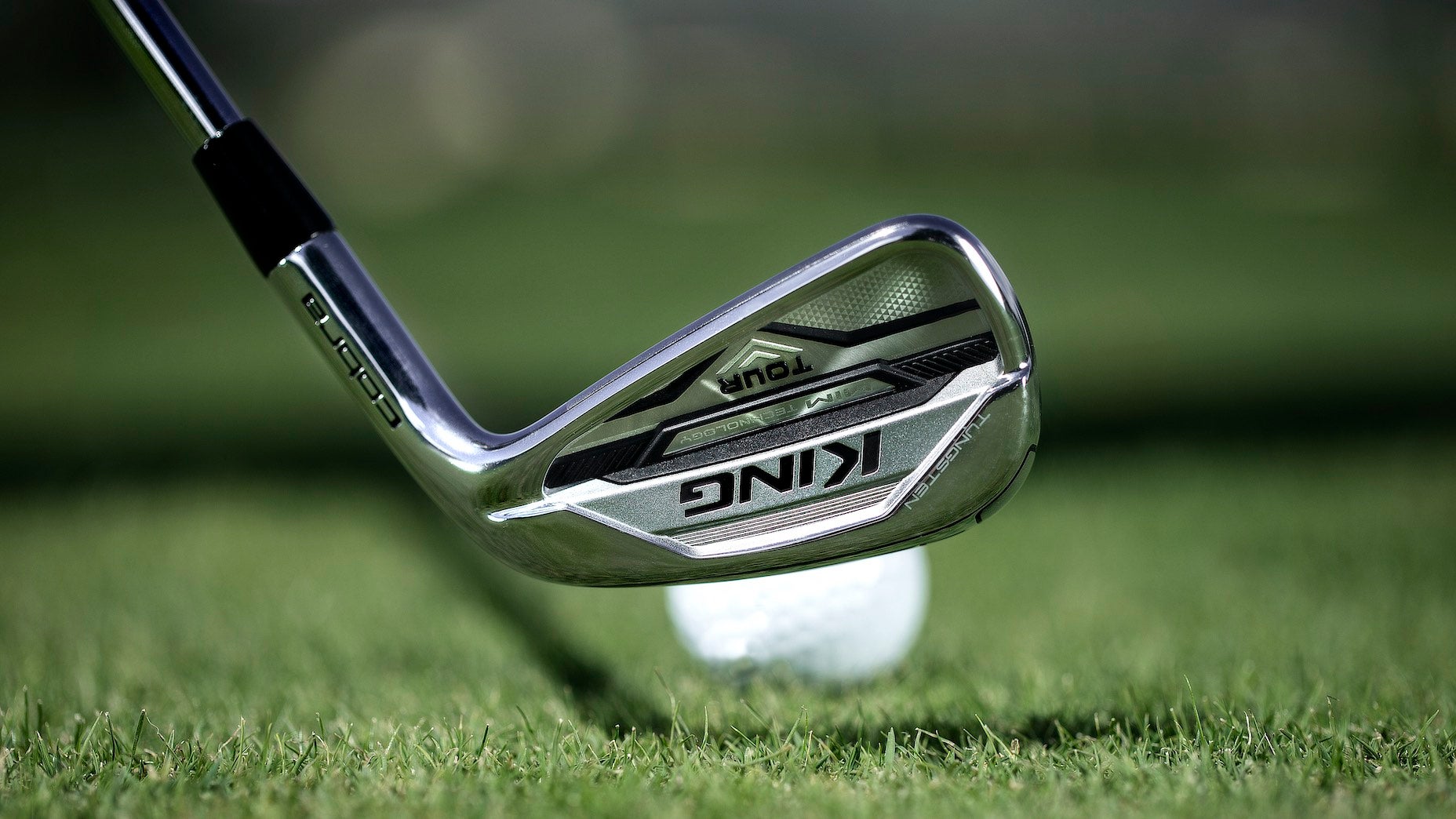 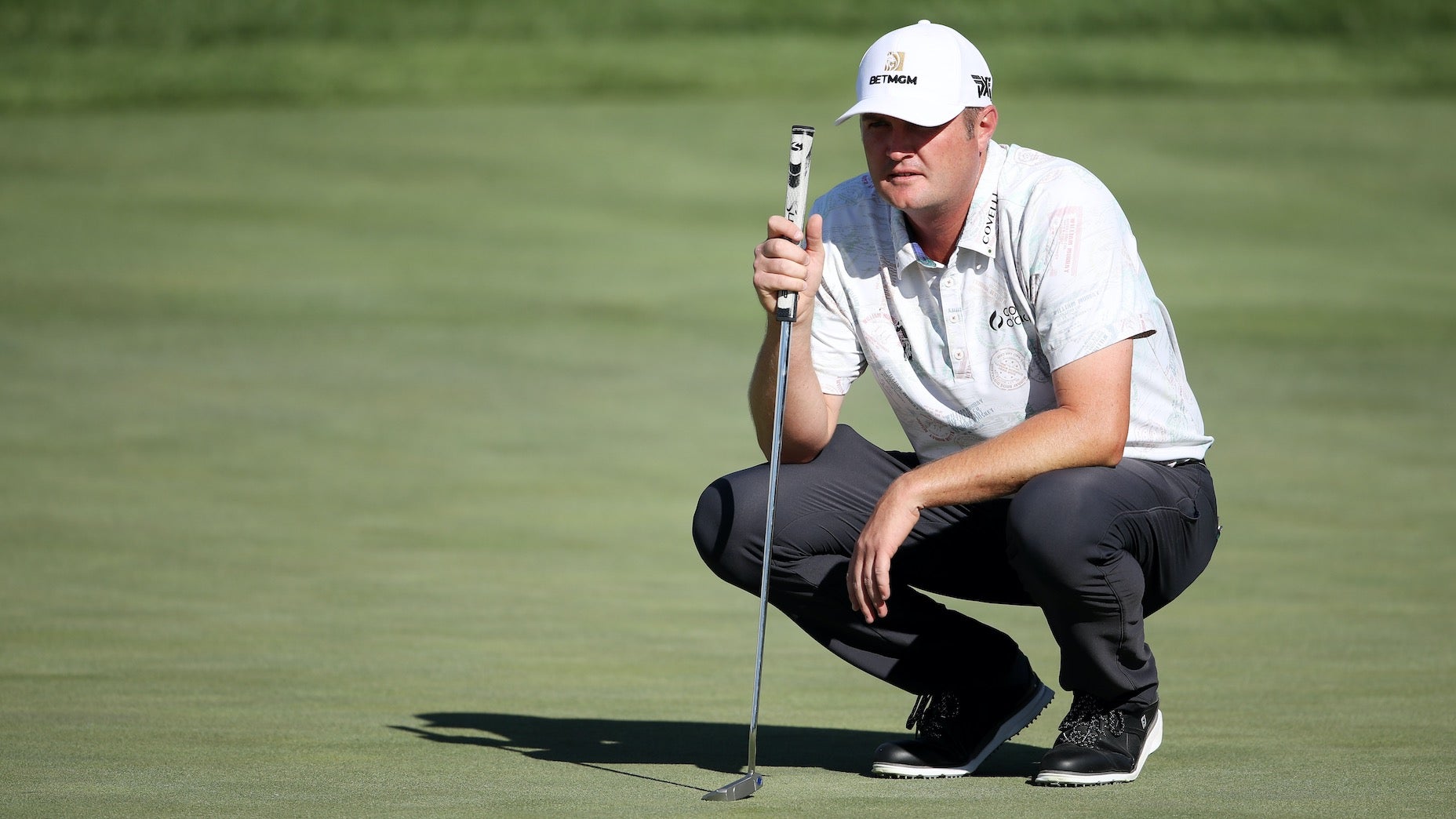 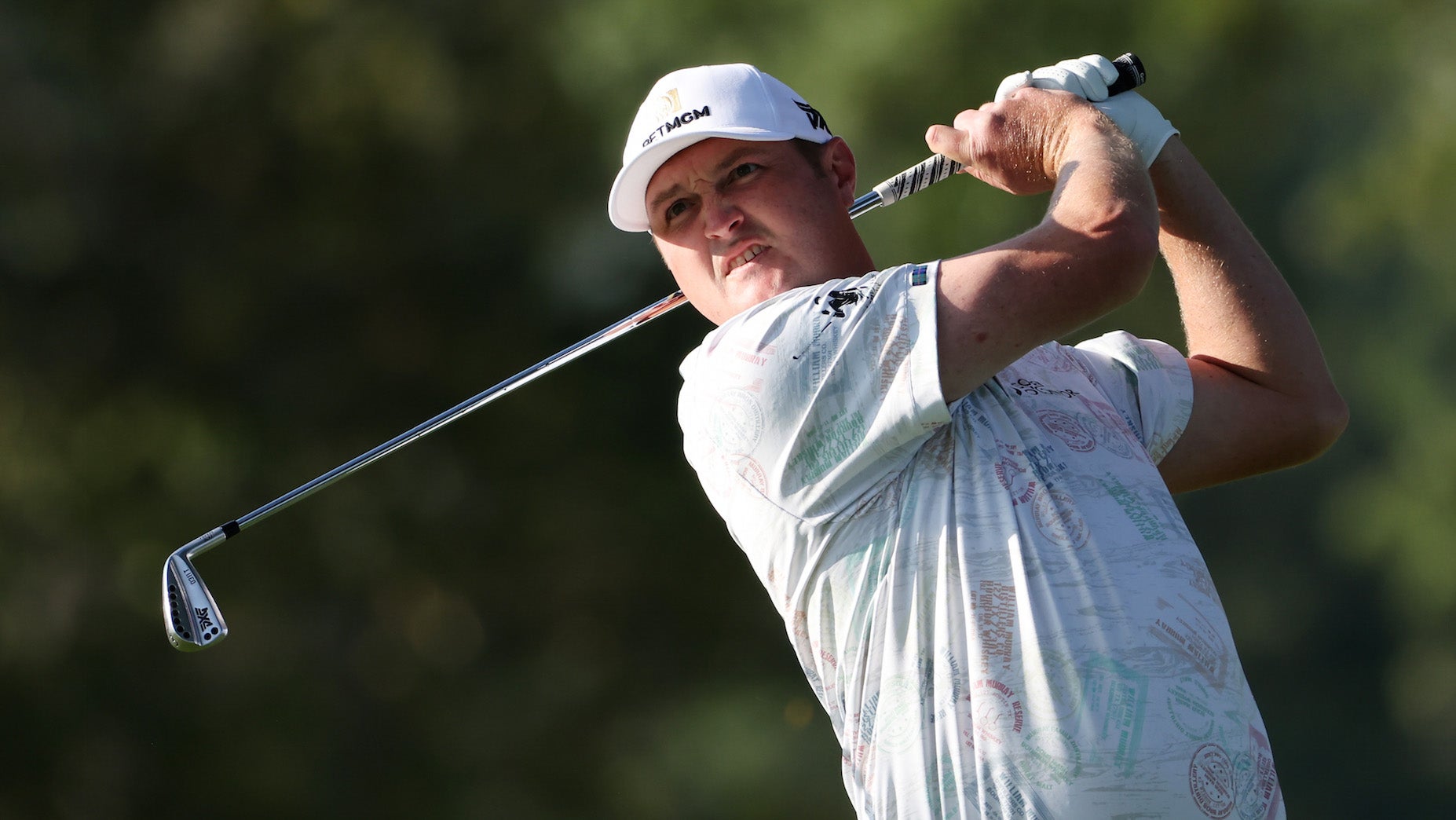 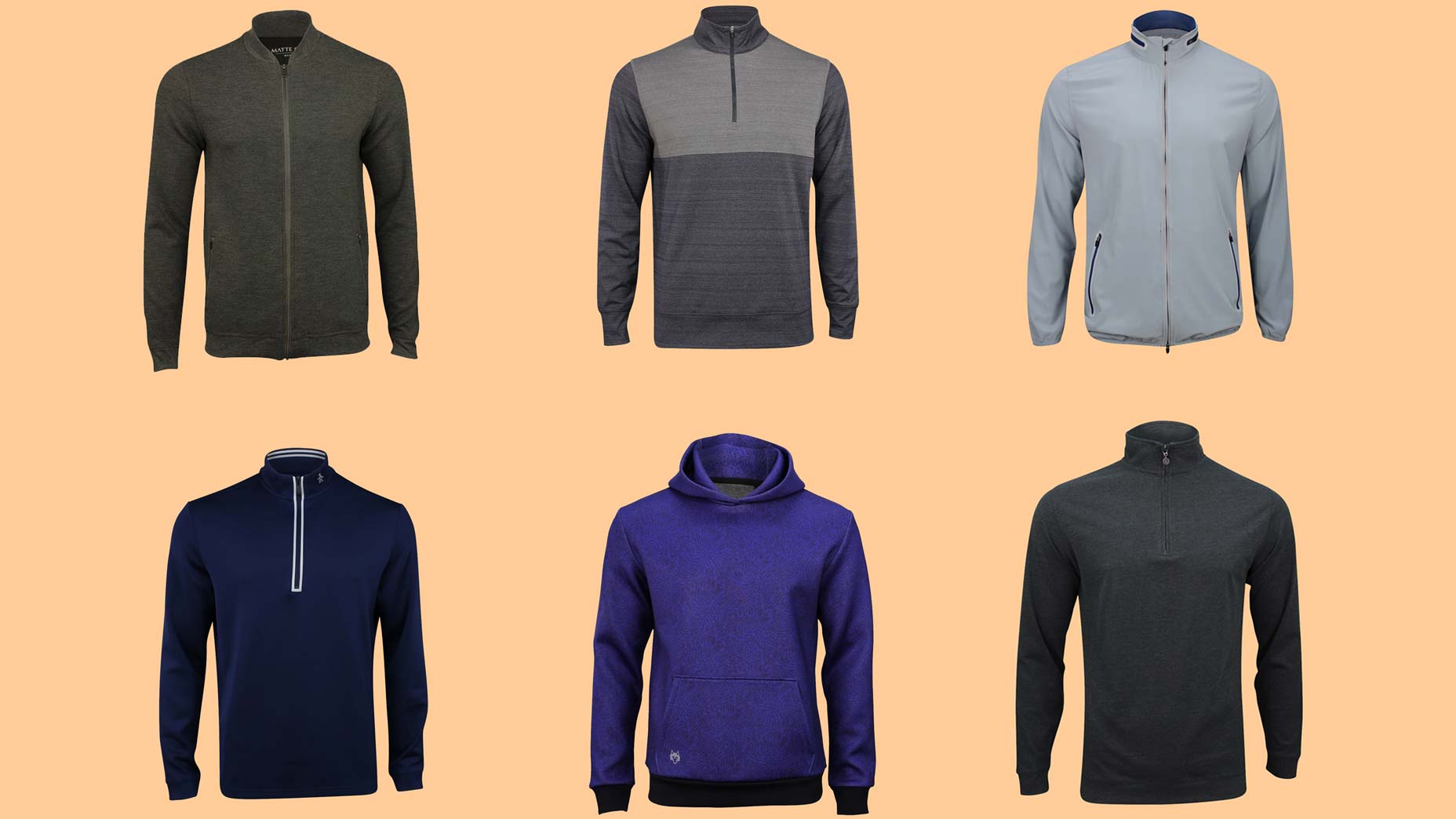 Editor’s Picks: 6 pullovers and jackets perfect for golf in the cold