4 things to know about The Match: Champions for Change 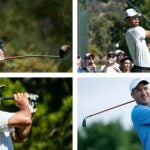 Phil Mickelson teams up with Charles Barkley to go against Peyton Manning and Steph Curry in The Match 3.

While Black Friday might mean a shopping spree for some, for us golf degenerates, it’s an opportunity to kick back and watch the latest iteration of The Match. This event, deemed The Match: Champions for Change, comes on the heels of a surprisingly successful match back in March.

The cast of characters is a little different this time, and so is the setting, but the entertainment value should be all the same. So, if your Friday plans include lounging on the couch as opposed to opening your wallet, read on and learn four things you need to know about The Match 3. 1. New faces in the crowd

As mentioned earlier, the participants in this match will differ from past editions. The original Match featured Woods and Mickelson, while teams were implemented in The Match 2. Teams will again be used this time around, but only one participant will be a professional golfer.

Mickelson will be paired with NBA Hall of Famer and famously inept golfer Charles Barkley, while their opposition will feature retired quarterback Peyton Manning and NBA superstar Steph Curry. Manning showed off his skills in the The Match 2, while Curry is a notoriously formidable golfer. It should make for an interesting, and competitive, match.

Like The Match 2, The Match 3 will also be for a good cause. This time, the charitable contributions will go toward Historically Black Colleges and Universities (HBCUs), benefitting diversity and inclusion around the country.

Ahead of The Match 3, Mickelson took it a step further and announced a massive, $500,000 donation to Jackson State University, an HBCU in Jackson, Miss.

“I am not knowledgeable, I am not qualified to talk about race, okay?” Mickelson said on the 21st & Prime podcast Tuesday. “As a white male, I’ll never be able to understand the challenges that Black America goes through, but I want to be part of the solution.”

Those donation numbers will only go up as play goes on Friday afternoon.

The previous Match was a handicapped, fourball match. This time around, the format they will implement is modified alternate shot.

In this format, each player will hit their own tee ball and then hit their partners ball for the second shot. From there, the teams can choose which ball to play out the hole with using standard alternate shot rules. This wrinkle will add a fun twist while making sure that each player gets involved on every hole.

Barkley is leagues behind the other three competitors in this event, so he’ll get his own set of tees to play from. These shorter tees, deemed by Mickelson as the “Charles tees,” should give Barkley an advantage that offsets his putrid ability off the tee.

“They’re (going to be) slightly ahead of everybody else,” Mickelson detailed on a recent appearance on the Callaway Golf Podcast. “That’s going to open it up to some possibilities where he might not have to hit driver every hole.”

Expect some banter throughout the day as Barkley plays it forward from the rest of his group on Friday.