The rough is up this week at Winged Foot

Welcome to Play Smart, a new game-improvement column that drops every Monday, Wednesday, and Friday from Instruction Editor Luke Kerr-Dineen to help you play smarter, better golf. The guest author of today’s column is Baden Schaff, CEO of golf instruction app Skillest. To learn more about Skillest and to book a lesson of your own with Baden, head over to Skillest.com or download the app in the app store.

Winged Foot! That fabled place where 14 years ago a fellow Australian got up and down on 18 and then waited for Phil Mickelson to implode. In June 2019 I was lucky enough to play there with my favorite GOLF.com fellas Luke Kerr Dineen, Rory Fugazy, and Tim Reilly. For me, the course is nothing like what I play back home in Australia. Our country is far too arid to have such rough, so even as a pro that had played across the world this was a totally new experience.

Playing from long rough requires some big technical changes and I wasn’t surprised to hear recently that one of my Skillest students, a Connecticut resident with a seven handicap, still has a huge amount of difficulty playing from the rough.

Paul Sullivan is a writer at the New York Times and Golf.com. He writes the money column in both publications and we started working together whilst he was researching for an article he recently published about digital coaching. His passion for golf is unparalleled, so you could imagine how frustrated he was when he arrived at Winged Foot full of enthusiasm about his new game only to discover he had no ability to extricate the ball from the outrageously long rough.

Simply put Paul, has always swung the club too flat and that just doesn’t work if you are trying to hit solid, crisp and compressed irons. If your attack angle is too shallow the rough will eat your club alive. You need a descending attack angle to make ball first contact.

So here are 4 fixes I worked on with Paul to transform his play out of the rough.

1. Pick the club up quickly on the backswing

Paul was under the impression that he needed to have a wide takeaway to generate power. Unfortunately, this wide takeaway was flattening his golf swing. If you want to hit really crisp irons you want a narrow radius. Don’t extend the club away from you, merely pick it up, fold your trail arm immediately and you have a club that travels more vertically thus creating a downward hit. 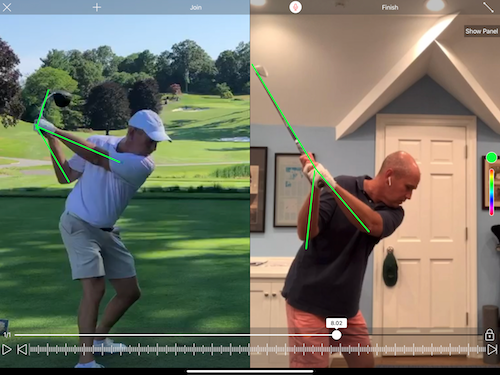 Paul not only had a wide takeaway but he was also an over-rotator. So the more he rotated the flatter and flatter his arms went. So I told him simply to face the ball the entire time. Stop trying to turn so much and keep your chest towards your Titleist. This smaller turn helps your arms work more vertically thus creating a more descending attack angle. Paul has always had the image of Ben Hogan’s swing plane in his mind. If you combine a wide takeaway with lots of rotation and then add a concept of swinging the club on a flat plane you will never be any good out of the rough. The reality is that to hit good shots out of the rough your arm and club direction will never feel like it’s on a plane. It’ll feel much too vertical. But embrace it!

Paul had lots of movement off the ball — and in turn, lots of weight shift — which made it almost impossible for him to play effectively out of the rough. He would generally start with his weight on his right foot and then shift it even further to the right. This may feel like a power move that explodes the ball out of a poor lie but all it does is change the low point of your swing and in this situation your low point is everything. So stay “on top of the ball”, keep your sternum in the same place as where it starts, hold your shape and the low point will be at the ball, not behind it.

I found playing a course like Winged Foot can actually be very forgiving. It’s almost like playing on Velcro, where it lands is where it stops. The opposite of what I’m used to. So if you have the skills to play effectively out of the rough this style of course can actually be very playable. Just remember the above 4 steps and you’ll have a rewarding day.