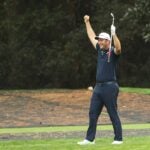 Jon Rahm made an ace to remember Tuesday at Augusta National.

Crazy things tend to happen at Augusta National, and this fall Masters appears to be no different. Enter Jon Rahm at the 16th hole.

Rahm turned 26 Thursday, and celebrated his morning with a press conference in front of the media on site at Augusta National. Pretty ho-hum for a birthday. But just a few hours later he was standing beside the pond on 16, preparing to skip his ball across the water at the par-3 green. It’s a Masters tradition, in the practice rounds at least.

It’s typically an unpredictable shot, Rahm’s skipper did exactly what he intended: it started at the right edge of the green, skipped once, twice, then a third time before bounding into the turf and shooting forward. With the hole located in the back left portion of the green, there was plenty of room for rollout.

Eventually, Rahm’s magical shot caught the infamous slope on the back side of the green and began funneling to the hole. You can probably guess what happened from there: it dropped in for an ace.

Sidenote: Vijay Singh’s ace on this hole in 2009 is very similar (and maybe better!).

If that isn’t enough crazy for you, just know that was Rahm’s second ace THIS WEEK — and it’s only Tuesday! Playing the front nine on Monday with Rickie Fowler (who was also there Tuesday) Rahm aced the longer par-3 4th hole with a 5-iron.

So, however great your week is going, just know Rahm is having a better one. We’ll see if he can turn that luck into something special on the weekend, just like he did in our Simulated Masters from earlier this year.

Hole-in-one’s are always special, even more so at Augusta National. Here’s to hoping it happens again later this week! @themasters Thanks to @rickiefowler for the 🎥