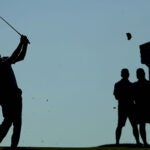 Jim Furyk has experienced many ups and downs over his long career.

The old cliche is that golf is a microcosm of life. There are ups and downs, with countless strokes of good and bad fortune along the way. It’s an oft-overplayed sentiment, but one I genuinely agree with because it’s true. Golf really can teach you a lot about life.

And if you’re looking for wisdom about both golf and life, your best source comes from golf’s best. Players like Jim Furyk, a U.S. Open champ and one of the most consistent players in modern golf history, despite battling some heartbreaking losses — notably at the 2012 U.S. Open, where he finished bogey-par-bogey to lose by two.

There were times when those disappointments threatened to propel his career into a downward spiral, but each time Furyk dusted himself off and tried again. It wasn’t always easy, but he’s better off for it.

This week, ahead of the Safeway Open, the former Ryder Cup captain was asked what he does to pull himself out of a “funk.” His advice was simple, and can help you both on and off the course.

When bad things happen, both in life or on the golf course, it’s easy to begin lying to yourself about the cause of why things went wrong, Furyk says. Lying to yourself is easy, and blaming things you’re not responsible for — like bad luck, for instance — can often lead you down a path of not needing to make difficult choices. Furyk says the key is being honest with yourself, and more importantly, surrounding yourself with people who aren’t afraid to be honest with you.

“Being real honest with yourself, why am I not playing as well? Sometimes the truth hurts,” Furyk says. “You want to surround yourself with good people that will tell you the truth. But I think sometimes for all of us, it’s just listening. You can hear it, but until you really pay attention, listen to it and you buy into it and go and try to fix the problem, for me it was difficult.”

“For me, like my father, who’s my teacher, my wife, the folks that are really close to you that will shoot you straight and maybe tell you what they see is the difference when you were playing well and playing poorly.”

Once you’ve taken a good, hard look at yourself, Furyk says it’s time to get back to work on the basics. Often times it’s those simple things — the “overlooked weaknesses” — that have been holding you back. They’re not the things that are necessarily hard to fix, but they’re easy to forget.

“Getting back to basics, going to work on the parts of your game that are struggling,” he says. “Sometimes it’s a physical error, sometimes it’s a mental issue as well, just being too tired, not being fresh enough, whatever it may be.But really, trying to step out of the bubble that you’re in and take a really good look at yourself.”