Rory McIlroy almost ruined his U.S. Open — until his caddy saved him 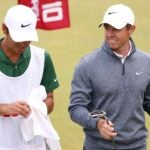 For Rory McIlroy, Harry Diamond is both friend *and* caddie.

BROOKLINE, Mass. — “Why don’t you just play out here?”

Those were the words from caddie Harry Diamond, spoken lightly and politely to Rory McIlroy.

Technically it was a question, but one with a subtext of disapproval. The kind that invokes a sense of guilt. The kind only possible from one of your closet friends. Someone who truly knows and cares about you.

It was all Rory needed to hear. He laid the long iron he was holding back on his golf bag, turned his gaze sideways, and began pacing to the edge of the fairway.

“Shouldn’t you be doing that?” one fan, holding a quickly-emptying beer, asked Harry. Harry stayed put, and placed the two clubs Rory had left out back in his golf bag — a 4-iron and 5-wood.

“72 yards,” McIlroy said when he returned.

Out came a wedge, and off went the ball — diagonally backwards into the middle of the fairway. A few minutes later, Rory’s ball was 13 feet from the pin, and then into the hole for a potentially tournament-defining par.

Rory McIlroy has a bad habit. One that keeps arising, as bad habits tend to do. It stems from good intentions, but it’s the single biggest reason Rory has gone winless in his last 29 major starts.

It’s not that Rory makes mistakes, it’s that he’ll never just make one. He’ll try to recover from a bad shot with a heroic one. When it doesn’t work, it means one error becomes two. That’s enough for a bad hole, or two. Soon, the entire thread of the round is being pulled until the once-beautiful thing is left unraveled.

On Saturday at The Country Club, Rory was pulling the thread once again.

From the middle of the fairway on the 12th hole, Rory left his short iron short-sided in the rough at the front of the green.

It was a tough shot — the wind had been gusting — but not an excuse for the one that followed. A chip that was too cute, which soon came rolling back down to his feet. Another too-cute-but-slightly better chip followed, and he spent the next minutes lining up his five-footer with his head in his hands.

Rory snap-hooked his drive left on his next hole. Now was the moment his entire tournament was going to fall apart. We’d seen it all before, sadly, and come to expect it.

As Harry was busy managing the chaos of the crowd around his ball, Rory had initially reached for a 5-wood to thread through the trees. When Harry returned, Rory had settled on a different plan.

“I was ready to hit a 4-iron off my front foot and hit it up over those trees,” he said.

The shot Rory was considering was unfathomably difficult. The low route was an elevated gap of about the three yards, if that. The high route required lifting his 4-iron iron off a scratchy lie, over trees and water onto a green 206 yards away

“[Harry] said to me, ‘Look, you could pull it off, but you could also make a 7 or an 8 doing it,'” Rory said after his third round, a 73, which leaves him three back of the lead going into Sunday. “He said, ‘Look, why don’t you just play out here? Don’t even think about it.'”

Rory decided to listen — “For once,” he joked. The sequence of events led to Rory saving par, which, according to the USGA’s win probability chart, raised his chances of victory from 8.6 to 11.3 percent.

Cut your losses and move on

There’s no doubting what the statistics say is the best move in a spot like this, both from golfers competing in the U.S. Open this week, to those playing your local municipal course down the road.

According to renowned statistician Mark Broadie’s book, Every Shot Counts, from 100 yards in the trees, tour players average 3.8 strokes to finish the rest of the hole (4.8 if you count their previously hit drive). That’s almost exactly a shot higher than it would be had a drive of the same distance landed in the fairway.

A hero shot gone wrong leaves you in roughly the same spot you started, but adds an entire stroke to your score along the way. Simply put, it means the risk isn’t worth the reward. It’s why statistician Scott Fawcett, the founder of the DECADE course management app based on Broadie’s insights, endorses a simple strategy: Move your ball back to safety, uneventfully. Cut your losses and move on.

“Recovery shots from the trees are the easiest place on tour to gain fractions of a shot without too much risk,” Fawcett says. “However, the allure of hitting a hero shot and gaining more is very enticing.”

The allure was certainly enticing for Rory on Sunday afternoon, but this time, Harry had his way. He helped Rory stave off those instincts, and if Rory lifts the trophy on Sunday, it’ll be because his decision the 13th hole kept him in the fight.

“That’s the benefit of having a good caddie,” Rory said.

And, more importantly, a friend. The kind who looks out for you, wherever your drives end up.