How Jon Rahm’s U.S. Open-winning putt was aided by the 2008 broadcast 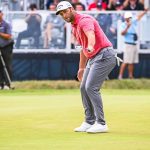 Jon Rahm knew his major-winning putt had more break than it first appeared.

Jon Rahm’s back-to-back birdie finish in the final round was remarkable. Not only was it impressive to see a pro close with such confidence, but it was also incredible to see two immensely difficult putts holed in a row.

The putt Rahm jarred on the 18th stands out as one of the best putts to close out a major in recent memory. It’s not often that a player wins his first major by birdieing the last, but Rahm did just that.

Rahm revealed after the round that he was confident in his read and knew the ball would snap hard to the right at the end. And he got that intel by watching Lee Westwood’s putt on the U.S. Open broadcast from 13 years earlier.

“I watched Lee Westwood hit that putt to tie Rocco [Mediate] a couple of years ago on 18, and I knew at the end it snaps hard right at the end … It doesn’t really look like it, but it does,” Rahm said. “So I was aware of that, I trusted my read, and as soon as I made contact, I looked up and saw where the ball was going. It was exactly the speed and line visualized, and I told myself, that’s in.”

Professional athletes are known for their vigorous preparations but analyzing game tape from 13 years ago takes it to the next level. Impressive stuff from Rahm.

At the U.S. Women’s Open two weeks ago, Nelly Korda shot 78-75 on her way to a missed cut. Last week, she shot 25 under to win the Meijer LPGA Classic. Golf is a funny game, isn’t it?

And while she surely made some minor swing tweaks to get her game back into peak form, she credited a shift in mindset as the reason for her resurgence last week. Specifically, Korda tried not to put too much pressure on herself.

“I just enjoyed myself honestly,” she said. “I just kept telling myself, ‘If I make a mistake, it’s golf.’”

“And I just had fun with my caddie,” she continued. “I was laughing out there a good bit, which on Sundays when I’m in the final group I forget to smile and laugh, and I’m so zoned in on hitting these perfect shots and making sure I execute everything perfectly that when something is off just a little bit, I get so angry at myself and so hard on myself. Today I was like, ‘Okay, we take it how it is and just enjoy the moment.’”

Sometimes, having a little fun on the course can make a world of difference in how you play.

Mackenzie Hughes had a fabulous week at the U.S. Open. He held a share of the 54-hole lead and was firmly in the mix until an unfortunate break left his ball up a tree on Sunday’s back nine.

Hughes surely practiced countless hours to prepare for moments like those, and part of that preparation was in the gym. Or, in Hughes case, in his home.

In a video posted by the PGA Tour last week, they took an inside look at how the 30-year-old gets his body ready for competition from the comfort of his home.

“It’s not the perfect space,” he said. “But it’s definitely all we need to get the job done.”

Sometimes, that’s all you need.