WATCH: U.S. Open contender collapses after his ball gets stuck in a tree 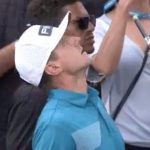 Mackenzie Hughes looks for his ball on Sunday on the 11th hole at Torrey Pines.

“It never came down,” another said.

It’s what you don’t want to hear during the final round of a U.S. Open, when you’re just two shots out of the lead, while in search of your first major championship. Then Mackenzie Hughes teed off on the 213-yard, par-3 11th at Torrey Pines on Sunday.

Hughes hooked it, he dropped his iron on the backswing, then kicked it. His ball bounced on the cart path left of the green and headed toward a tree — and fingers and heads of the fans standing nearby pointed up.

“Where did that end up?” analyst Paul Azinger said on the NBC broadcast. “That couldn’t have stayed up in that tree, could it?”

“They’re all looking up there like it did,” announcer Dan Hicks said.

NBC cameras would show a ball stuck between two branches, and Hughes would use one of the cameras to identify that it was his. By doing so, he unlocked two additional options of relief under the rules: lateral, under rule 19.2c, and back-on-the-line, under rule 19.2b. If he couldn’t have identified his ball, he would have been forced to take the much more penal stroke-and-distance relief option, under rule 19.2.

From there, Hughes took his penalty stroke, dropped nearby and pitched to 13 feet before two-putting for a double bogey. He had started the hole two shots out of the lead. He’d leave it four back.

“Incredible odds against a ball sticking in a tree like that,” Azinger said.