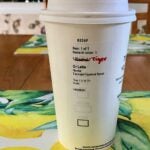 For most of his career, Tiger Woods has been golf’s most mysterious character, carefully guarding his secrets.

But put him in a car with Golf TV’s Henni Zuel and he spills all of his secrets, including his go-to coffee order that Zuel calls “extra,” and Tiger seems almost embarrassed to reveal.

It’s a simple order by Starbucks standards that will only cost you $4.75. (Note: Standard lattes at Starbucks include two shots of espresso, a.k.a a “doubleshot”)

Since I happen to be the resident caffeine addict and coffee connoisseur of the team, and had a 2 o’clock caffeine crash coming on, I decided to see for myself how Tiger’s order stacks up.

So I placed my order via the Starbucks app (social distancing approved), grabbed my keys and headed out to pick up my — I mean Tiger’s — coffee.

Typically, I like my coffee with a little milk and no sweetener or additional flavors. I enjoy the occasional espresso, but I’m more of a cold brew girl if I’m being honest.

So when I picked up Tiger’s drink, I was also bracing for it to be disgusting. Pumpkin spice lattes are not my thing, so I figured my tolerance for a strong flavor like hazelnut would be low.

As I sipped the beverage, I was pleasantly surprised. It was sweet and the hazelnut flavor wasn’t overwhelming as it sometimes can be. I’m not sold on hot coffee on a hot day, but the latte was definitely better than I was expecting. Two hundredish calories, 37 carbs and 12 grams of protein later, I’d solved my caffeine fix like a 15-time major champ.

Although, for as serious as Tiger is, I’d never guess his coffee order would be so…basic. I figured he’d take his coffee black to match his intensity on the course. But I guess when he’s waking up at 3 or 4 a.m. for a tee time, it’s nice to have something delicious waiting.

Either way, now we know one more thing about Tiger that we didn’t before: his coffee order.