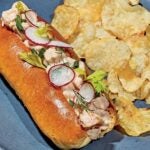 For anyone who has spent any time in South Carolina’s Low Country, one menu item has likely seemed more ubiquitous than others: shrimp. Hey, Charleston isn’t known as Shrimp City for nothing.

And just 25 miles southwest of that culinary hot spot, the Kiawah Island Club’s B-Liner serves up a lunchtime staple that has earned rave reviews from discerning palates: the Shem Creek Shrimp Salad Roll. But what is it that makes this particular iteration so utterly delectable? According to consulting chef Mike Lata, it’s all about the entrée’s star: the shrimp.

In many other parts of the U.S., shrimp is often imported from places like Thailand, but the B-Liner’s shrimp is proudly local. Lata describes it as both succulent and delicious. “It’s just one of those things that you can’t get enough of,” he says.

The club often serves over 500 pounds of shrimp in a given week, all of which comes from Tarvin Seafood, a Charleston-based shrimper docked on nearby Shem Creek — a delicious boon for the local economy. “Our dedication to keeping our fishermen and farmers in business has allowed our supply chain to be really robust,” says Lata. A win-win, to be sure.

-Prepare an ice bath for shrimp in a bowl.

-Bring 6 cups water to a boil. Stir in Old Bay. Reduce heat to simmer. Add shrimp and poach until just cooked through (3 to 5 minutes). Transfer shrimp to ice bath.

-Drain shrimp, pat dry. Dice into bite-size pieces. Add shrimp and celery to bowl with mayonnaise mixture and gently fold together. Season with salt and pepper if necessary.