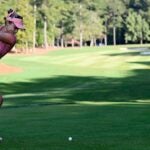 Lexi Thompson, one of Kolby Wayne's many tour players, is no stranger to reaching peak performance at the right time.

HOUSTON — The final major of the year is upon us. This week the U.S. Women’s Open takes center stage as players tee it up on not one but two courses at Champions Golf Club in Houston.

Much goes into prepping for a major. Players need to learn the course (or two courses), dial in their gear and ensure every part of their game is primed for Thursday.

Everything needs to peak at the right time if they want to hoist a trophy on Sunday and call themselves a U.S. Women’s Open champ. That includes their physical fitness.

So, how do you ensure you “peak” at the right time?

Kolby Wayne Tullier, athletic trainer to a who’s who of the game’s best players, including Nelly Korda, Lexi Thompson and Justin Thomas, says it’s a process that is centered on consistency.

At the AIG Women’s Open in August, then 304th-ranked Sophia Popov shocked the golf world by storming to a two-shot victory at Royal Troon. In September, Mirim Lee defeated Nelly Korda and Brooke Henderson in a dramatic playoff at the ANA Inspiration that wasn’t without controversy. Then in October, Sei Young Kim captured her 11th LPGA win and first major title at the KPMG Women’s PGA.

He works with his athletes year round, using the off-season to build muscle and then shifting the focus to maintaining a strong, explosive body once the season starts up.

“During a major week, their stress is heightened, but it’s important to keep their fitness routine exactly the same,” Tullier says. “Stay in the gym. You don’t want to overdo it, but you keep working out like every other week.”

The way the LPGA schedule shook out during this condensed season, players actually had a bit of a break leading up to the U.S. Women’s Open. During those few weeks, Tullier focused on load-bearing exercises with his athletes.

About a week out from the USWO, he started programming workouts that were more dynamic and stressed athletic, explosive movement. (Two things that are very beneficial for a swing.)

The final piece to Tullier’s formula is recovery. Because players are more stressed during a major week, recovery is that much more important. “It does no good to push yourself if your body isn’t ready,” Tullier says. “You won’t get much out of working out or playing more.”

While you may not be playing in a major tournament anytime soon, you can use Tullier’s method to prepare for big events you do play in like your club championship or a member-guest.

1. The week of the event is not the time to be lifting heavy

Your strength training phase should begin weeks before the event since you have to train consistently over time to reap the benefits.

2. Shift your focus about a week out from the event

A week or so out from your big event, you should be focused on your dynamic phase of training to promote speed, athletic movement and explosiveness. This means switching to lighter weights and faster movements.

Recovery is arguably the most important part of this formula. The better your body is able to recover the more you’ll be able to get out of your workouts and practice rounds on the course. That means plenty of sleep, mobility work and being honest with yourself about how you feel and what your body is capable of.

Do these three things and you can peak for your big event just like the best golfers in the world do for majors.

'Lucky' golf items might actually work, according to study