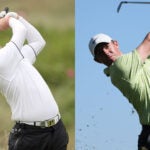 Rory McIlroy got injured in 2010, which sent his career on an entirely different direction.

Then, like a rubber band, Rory turns all that flexibility into clubhead speed with a rapid turn of his hips towards the target. As measured by the Titleist Performance Institute, which was cofounded by GOLF Top 100 Teacher Dave Phillips, young Rory rotated his hips at an incredible 720 degrees per second — compared to the Tour average of about 500 degrees.

That allows his upper and lower bodies to separate from one another, before coming together again for maximum speed through impact.

Those both sound like good things, and they are! But young Rory was also missing one critical component to make it all work: Muscle mass.

“[Young Rory] this incredible acceleration, incredible velocity, small mass, incredible torque, that’s just a recipe for disaster.” TPI’s Dr. Greg Rose says. “We have so many players who have gotten injured doing this. It’s amazing how great you can hit the ball doing this, but the question is how long it will last.”

Rory’s speed was based on a huge amount of flexibility, and while a flexible golf swing is a good one, it’s also a double-edged sword. You need muscle mass to control your flexibility and to withstand the speed your elasticity creates.

Rory almost learned this the hard way. He got injured in 2010, which scared him so much he decided to make a huge change to his lifestyle. He started eating healthier, getting stronger, and probably saved his career because of it.

“So when you look at players and wonder ‘oh, why are they doing this in the gym?’ you have to understand the background of why they’re doing it,” Rose says. “The point here is that a safe exercise program is designed to preserve your career, and improve you as a player…to just say ‘I can’t believe you’re lifting heavy weights’ without any perspective or background is just plain old ignorant.”

Ready to overhaul your own bag? Visit the expert fitters at our sister company, True Spec Golf.