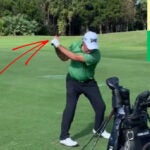 There’s so much I love about this video (below), not least of which is the image of an 85-year-old Gary Player, with a big bucket of range balls, grinding it out, working hard on improving his golf swing. Deep in our hearts we knew this was the case, but it’s nice to get some proof.

But what, exactly, was Player actually grinding on?

Though Player is an aging wonder by even the most discerning standards, he’s still not immune to the physical effects of time. And one of them — the length of his backswing — is one he’s busy trying to stave off.

When people get older, their bodies naturally become less flexible. It’s a normal part of the aging process that results from joint stiffness and a lack of water in your body’s tissues. For golfers, that physical limitation manifests itself most apparently in the length of your backswing. It’s evident in Player’s own move; while his flexibility is still remarkable for an 85-year-old, his swing his notably shorter than it was earlier in his career, as you can see below.

That forced-shorter backswing can be an issue for aging golfers, because a longer backswing is scientifically proven way of boosting your swing speed. Gary knows this, which is why he works so hard on trying to maintain that flexibility. It’s something we first saw Gary working on under the watchful eye of Jack Nicklaus earlier this year at Big Cedar Lodge.

“Why does that happen?” Gary asked his friend, Jack. “Alright, I know I’m a bit older, but why?”

This weekend, Player was back on the range hard at work trying to lengthen his backswing when Nicklaus stopped by once again to help him out.

What was Jack’s advice? In both videos above, Jack tells Gary that his arms and club are, essentially, moving too much inside and around his body. That’s restricting the length his arms can travel on the backswing, Jack says, which is why he tells Gary he could benefit from extending his arms higher, toward the sky. By freeing up his arms, they’ll be able to swing back more, which will help lengthen Player’s backswing and add speed.

As for a stretch to help instill this swing feeling: As Jack watches, teacher Rick Smith puts Player’s left hand on the top of his golf club, and holds it as he stretches his right up and behind him.

Gary does this a few times, then begins ripping drivers again. His swing already looked a little longer, and along the way, he got a nugget of advice we can try the next time we’re on the range.