Butch Harmon fires back at Brandel Chamblee: Brandel is not an instructor 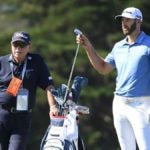 Butch Harmon, left, talks with Dustin Johnson during a practice round before last year's U.S. Open.

Golf instructor Butch Harmon says Chamblee should take those two seconds and do something else.

“If it was that simple, Brandel, you should go fix it,” Harmon said earlier this week on an Instagram live video with his son, Claude Harmon III, also a golf instructor. “It’s pretty easy. If you feel it takes two minutes to fix him, you’d be a fool not to call him up on the phone and say, ‘Hey, look, why don’t you come by and let me help you?’ ”

Spieth’s fall-off has been well-documented, particularly the decline of his driving accuracy and iron play. Chamblee has argued that it’s merely a mechanical issue. In an interview with Golfweek late last month, he compared Spieth’s swing in 2015 to his swing in 2020, noting a body-position change.

“There’s consequences to these movements,” he said. “You cannot change the engine pattern. [The video from 2015] is how Jordan plays his best golf. Why would his teacher tell him to change that? Why? He’s either being told to do that or whoever’s watching him doesn’t see that he’s doing that. That would take two seconds to fix. Two seconds. But he’s clearly been told that or somebody’s watching him who is not aware.”

Chamblee, Butch Harmon said, is not an instructor.

“Look, I like Brandel. Brandel and I have been friends forever. I think he does a great job on TV,” Butch Harmon said. “But the difference is, Brandel is not an instructor. Brandel was a Tour player. And he wasn’t that great of Tour player anyway. He was a middle-of-the-pack kind of guy. He’s got a beautiful golf swing, but he wasn’t the greatest player.”

Chamblee’s references toward Spieth’s teacher, Cameron McCormick, drew the ire of both Butch Harmon and Claude Harmon III. Instructors and players “do not throw people under the bus,” Claude Harmon III said. But Chamblee is “this character now on TV.”

“Everything kind of feeds into his kind of narrative, and to me, he just says things to get more lines for his character and the drama he’s trying to play,” Claude Harmon III said.

Added Butch Harmon: “I don’t think it does you any good to talk bad about somebody else who’s in the same profession you’re in. We all have our opinions on players. You could ask 10 top instructors, ‘Pick out any player. What do you think he should do differently?’ And somebody would say, ‘Well, I think if he did this, or if he did that or did this.’ But I think no instructor is personally giving him an instruction to make him worse. We’re all trying to help everybody.”

Chamblee, Claude Harmon III said, has “no chance” of giving that instruction.

“He’s got about as much chance giving golf lessons and helping players get better as I got at playing a PGA Tour event and winning tournaments,” he said. “Because I’m not a good golfer and I guarantee you he’s not a very good instructor.”

'Lucky' golf items might actually work, according to study