Butch Harmon has some spicy takes on golf rules, bifurcation and bowling 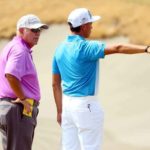 There are two sports where you bring your own ball, Butch Harmon says. Golf and bowling. Or maybe just golf.

“It’s the only sport in the world other than bowling – which I don’t count as sport; that’s just an excuse to drink beer – that you bring your own ball to the competition,” he said. “Every other sport, the ball is provided for you.”

Golf is also the only sport, the longtime golf instructor said, where the pros are governed by amateur rules. The average player plays by that set of rules – and with those limits on technology. And so do the players on the PGA Tour.

“I think technology should be for the average player and not the Tour player,” Harmon said earlier this week on an Instagram live video with his son, Claude Harmon III, also a longtime instructor. “I think the Tour should have its own rules.”

The changes center around distance. The current technology for professionals is making “some great golf courses obsolete,” Butch Harmon said, as players are hitting it longer than previous generations. Golf’s governing bodies, the United States Golf Association and the R&A agree, with the distance issue. Their Distance Insights Project released in early February said that “continuing increases in overall hitting distances will not make golf a better game as a whole. For example, while it is remarkable that long-drive competitors can hit a ball as much as 400+ yards, golf would not be a better sport if anything close to that became a norm for play or if course lengths increased to match it.”

The USGA and R&A, however, said they did not want bifurcation — the idea that elite players and pros could play with a different set of rules governing their equipment. Harmon said “technology should be for the guys at the country clubs. They’re the ones that need the help.”

That applies across generations, too.

Golf is also the only sport, Harmon said, where former stars would be better if given the new equipment. He used NFL middle linebackers as an example – Sam Huff, Ray Nitschke, Dick Butkus and Chuck Bednarik “couldn’t even play today; they couldn’t pass cover.” Ben Hogan, Sam Snead, Byron Nelson, Arnold Palmer and Jack Nicklaus would be better, as “the game has gotten easier for the good players because of equipment.”

“People will say, ‘Well, how can you say the game of golf’s gotten easier?’ It hasn’t gotten easier for us because we’re not that talented,” Harmon said. “But because of the club heads, because the balls don’t curve as much – the reason that these young players can hit the ball so far is they can swing that hard at it because it doesn’t spin. If you swung that hard at a wooden driver and a soft ball, that thing is going to go right off the planet.”