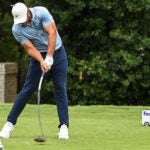 Brooks Koepka tees off on the 17th hole at TPC Southwind last Saturday.

Brooks Koepka wiggled his feet into position, raised his driver head slightly and looked up ahead on the 9th hole at Harbour Town Golf Links. He bounced the clubhead back to the ground behind the ball. He looked up again. He squared to the ball. His address, in all, took four seconds.

His swing took a second.

His ball took 11 seconds to travel 330 yards on the 329-yard par-4, which he would easily eagle during last month’s RBC Heritage.

His thinking took no time.

Koepka hits his driver hard. His thought process in doing so is easy, he said Tuesday in advance of this week’s PGA Championship.

“That’s the only thought,” said Koepka, the PGA’s two-time defending champion. “I don’t think – my mind goes blank. I kind of, I guess, black out a little bit sometimes while we’re out there. I don’t think of any swing thoughts. Don’t think of anything.

“I don’t do that in practice while we’re at home, but out here, just go out and hit the ball. Try to – whatever shape you’re trying to hit, just see it and go with it and swing it.”

It’s an approach he’s taken, too, to the majors themselves, where he’s won four, more than half of his seven PGA Tour victories.

Before last year’s PGA, he said, “There’s 156 (players) in the field, so you figure at least 80 of them I’m just going to beat. You figure about half of them won’t play well from there, so you’re down to about maybe 35. And then from 35, some of them just – pressure is going to get to them. It only leaves you with a few more, and you’ve just got to beat those guys.”

Before this year’s PGA, he said the same thing.

“I think that’s why I’ve played so well is I break things down very easily,” Koepka said. “I think for some reason, people make golf a lot more complicated than it should be. Worried about where shots go, results, you know, putting more emphasis on this week or the major weeks, when to me, it almost seems the most relaxing week of the year.

“I feel like Monday to Wednesday, conserving energy mentally, I’ve got a good routine, nine holes pretty much every day or less, and I leave the golf course feeling pretty refreshed, and then by Sunday, I’m mentally drained.”