How to attack tight pin locations, according to PGA Tour pros 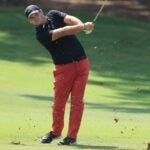 Ross is known for his penchant for small greens and putting a premium on accuracy of approach shots. Often times what seems like a well-struck shot can trundle away from the hole and off the greens if they land in the incorrect position. Players this week will have to be extra precise with their short-iron play if they hope to score well at Sedgefield Country Club.

A number of players were asked in their pre-tournament pressers how they hoped to attack Ross’ repellent greens, and they all agreed that attention to detail will be key.

“You have to really be strategic and think your way around this golf course on where to miss it,” said Brandt Snedeker, who has won the Wyndham Championship twice. “If you’re on with your wedges and on with your short irons, you can really control your distances and leave it in the right spots.”

Snedeker knows a thing or two about scoring on Sedgefield’s tricky greens. In the opening round of his win in 2018, he fired a 59 — the ninth in Tour history. Harold Varner echoed Snedeker’s thoughts on the keys to attacking those tricky hole locations, though he stressed that it all starts with hitting the fairways.

“Aim small and miss small,” Varner said. “You just need to be in the fairway. That’s the biggest thing. People always talk about you’ve got to be accurate with your irons, it doesn’t matter how good you are, if you hit it in the rough, it’s just hard to get it close to the hole.”

As one of the shortest, but most accurate (historically, at least), players on Tour, Zach Johnson answered similarly. Shots off the tee will be crucial this week, because even with a wedge in your hand, playing into a Ross Bermuda green from the rough is a difficult proposition. And once you find the fairway, controlling the trajectory and spin coming into the green is key.

“You can hit the number exactly how you want to, but if you don’t have the right kind of spin or if you don’t land on the right ridge or the correct spot, the ball’s going to work away from the hole,” said Patrick Reed, who won his first Tour event at the Wyndham in 2013. “I think that’s something that’s going to be shown this week.”

The mindsets might be old school, but when attacking an old-school course, that might be exactly what’s necessary