‘It’s horrible’: 1 major mistake amateurs make on the driving range (and how to fix it) 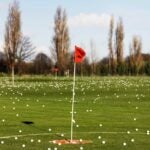 Next time you are on the driving range, make sure you do this.

Roaming the driving range at GOLF’s Top 100 Teachers Summit last month, I asked some of the best teachers in the game for their go-to tips. My goal was to keep it simple, finding useful and easy-to-process nuggets to help amateur golfers.

Todd Sones, who is based in Chicago, told me one surprising club amateurs should replace in their golf bags. He also told me what he thinks amateurs do wrong on the driving range.

The latter came after I asked what facet of the game amateurs don’t practice enough. He said the obvious answer is their short game, but he took it a step further, and said it’s how they practice that is the issue. He called it “rake and hit” on the range, which basically means blasting ball after ball without any set plan.

“It’s horrible, because all they are doing is ingraining bad patterns and getting a false sense of security,” Sones said.

According to Sones, this is also the answer to the following perplexing question golfers often ask: Why do I hit it so well on the range but it doesn’t translate to the golf course? Well, that’s not true, Sones says.

“I’ll say no, you just aren’t keeping score [on the range],” he says. “So I’ll say, here’s a green, it’s 150 yards out, how many can you put on the green? And they’ll see real quickly they put only one on the green and miss two over there, two over here and one short. The problem is you don’t pay the consequence on the range. You think you are good, and now you walk to the 1st tee with a false sense of confidence that quickly erodes cause reality hits and you hit one out of bounds. So I think getting people to practice correctly is maybe as important as what they are practicing.”

This is where a quality, well-thought-out plan comes into play. Sones said he’ll tell his students that when on the range they need to start their routine, line up to a target and make a swing trigger. (OK, slight tangent. So what’s a swing trigger? Here’s how GOLF’s instruction editor, Luke Kerr-Dineen, explains it: A golf swing trigger, in a nutshell, is a small movement designed to start your release of nervous tension and begin your swing. There are many different kinds of triggers: Jordan Spieth and Phil Mickelson adopt a slight forward press to start their putting stroke; Jack Nicklaus had his famous head turn; Lee Trevino and Gary Player used a knee-kick before starting their backswings.)

Then, Sones says, fire a shot at your target. And the target is just as important as the routine. Remember, as Sones mentioned, there are no consequences on the range. So while you think your wedge that’s somewhat close to the intended target might be pretty good, take a step back and wonder if it really would have hit every green you’re about to encounter. That visualization is important and might help you increase your focus. (There’s a course I wrote about earlier this year, Loggers Trail, that has an island practice green, which provided immediate feedback. You either hit the green or hear your ball splash. No false sense of security there.)