1 thing golfers should never change in their swing, according to Padraig Harrington 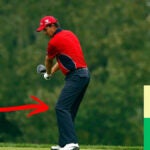 Padraig Harrington is, and has always been, a tinkerer with this golf swing.

Padraig Harrington is one of golf’s most legendary tinkerers in golf. It’s one of my favorite things about him. He’s a smart, thoughtful guy who never stops trying to get better, whether he’s World No. 1 or an elder statesman on Tour. It’s why he ends up doing stuff like this. It’s a bit like Bryson DeChambeau’s approach: He doesn’t care about how something looks, or what other people might think — he just does what he thinks will help him play better golf.

All which is why the below video from our friends over at GOLFTV caught my eye. In the video Paddy is presented with a number of his golf swings through the years, and immediately started dropping some interesting insight about how golf swings, more generally, work:

“With all golf swings, you don’t have a forever,” he says. “It’s a little like a ticking clock. It goes slightly too far one way and you have to bring it back.”

It’s something that certainly rings true for recreational golfers’ swings, which made it all the more interesting when Paddy’s standout line from the video wasn’t about the various things he changes over the years, but rather, the one thing he can’t — and won’t — change.

“It leads to disaster”

As Harrington begins his self-analysis, which you can watch in full above, he shares the two things in his golf swing that he says he’s never been able to get rid of. The first is a slight raising of his head on his backswing, and the biggest one: A slight squatting of his legs as he takes the club away:

He continued: “Whatever your trigger is in your golf swing, you can never really get rid of. People have tried to change their trigger over the years and it’s led to disaster.”

It’s incredibly slight — so watch closely — but you can see Paddy squat slightly in all his swings. The video below is a good example: The second he begins taking the club away, you can see his knees begin to bend ever-so-slightly.

What is a golf swing ‘trigger?’

Alright, lets back up a second and help explain what a swing trigger is.

A golf swing trigger, in a nutshell, is a small movement designed to start your release of nervous tension and begin your swing. There are many different kinds of triggers: Jordan Spieth and Phil Mickelson adopt a slight forward press to start their putting stroke; Jack Nicklaus had his famous head turn; Lee Trevino and Gary Player used a knee-kick before starting his backswing.

Golf swing triggers have always been around, but they’ve seen something of a renaissance recently. There are, generally speaking, two big reasons why players and coaches like them: First, as Kyle Berkshire explains here, it’s a great way to add some momentum into your golf swing and build more clubhead speed early, and second, because it’s a simple way of quickly releasing any lingering nervous tension that may otherwise cause you to get yippy.

Which brings us to my general rule that readers should take note of: If you hear multiple pros saying something is super important, you should probably pay attention. Paddy falls into that bucket, so take his advice. It doesn’t matter what your golf swing trigger is, but when you find one you’re comfortable with, don’t try to change it.