How It Works: Whoop is so much more than a round-the-clock performance monitor 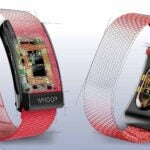 Each Whoop band offers a watch-sized load of useful tech.

Nick Watney didn’t have a fever, a cough or shortness of breath on the morning he became the first PGA Tour player to test positive for Covid-19. In fact, he had none of the telltale symptoms typically associated with the virus. If not for the notification on his phone, Watney might not have realized anything was wrong.

But as he checked his cell, the 39-year-old noticed an urgent message from Whoop, the 24-7 fitness monitor he wears around his wrist. Whoop had detected a spike in Watney’s respiratory rate overnight, in line with increases associated with individuals who tested positive for the virus.

A few hours later, Watney officially tested positive without any outward symptoms — an outcome detected by Whoop’s predictive algorithm. Within days, the PGA Tour had procured 1,000 Whoop straps, one for every player and caddie. Magic? Nope — just a watch-sized load of inventive tech.

This tiny chip is Whoop’s onboard computer. While it executes the functions that allow the band to provide you with high-tech health information, it uses a startlingly little amount of power, allowing Whoop to run for up to five days on a single charge.

Tracks heart rate, respiratory rate and heart-rate variability, three of Whoop’s most important data points. “The amount of light that gets reflected back into the light sensor fluctuates over time, based on how much blood volume is under the skin, and through that metric you get heart-rate data,” says John Capodilupo, chief technology officer and Whoop cofounder.

These tiny chips measure acceleration and orientation to track movement throughout the day.

What you actually wrap around your wrist also plays a crucial role in ensuring reliable data collection. “The PPG signal to get heart rate — which underlies the whole Whoop system — is an incredibly noisy signal,” says Capodilupo. “Getting a good strap fit and allowing it to work on anybody’s wrist — independent of their anatomy — was critical.”

The app harnesses the data collected by the strap to provide easy-to-digest info on three key components: strain, recovery and sleep. Think of it as a dashboard for your overall health.