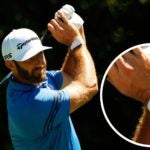 Dustin Johnson is among the many pros who already wear a WHOOP strap to monitor health.

Amid a handful of recent positive tests for the coronavirus arriving on the PGA Tour, all players and caddies will now wear WHOOP bands on their body to help detect the disease prior to showing obvious symptoms.

In the last week, the Tour has seen two players (Nick Watney and Cameron Champ) and one caddie (Graeme McDowell’s looper, Ken Comboy) test positive for the Covid-19. Watney was first, and according to Rory McIlroy Watney noticed something may have been awry via information from his WHOOP band. That is exactly the kind of information the PGA Tour hopes to add to its system of a controlled, traveling bubble.

WHOOP is a health-monitoring band that many Tour players already wear — generally on their wrist or upper arm — to manage sleep patterns, exercise, recovery, etc. Apparently Watney’s WHOOP system had shown abnormal breathing activity while he was sleeping. Later that day he received a positive test and was forced to withdraw from the event.

Now, the Tour is using that instance as inspiration. According to Justin Thomas, who spoke with reporters Wednesday at the Travelers Championship, all players and caddies will now wear the bands moving forward. WHOOP’s CEO confirmed that the Tour will have more than 1,000 bands at its disposal.

“Nick Watney was able to figure out that his body and his immune system was getting a little bit weaker and his respiratory rate spiked one night,” Thomas said, “and he never would have been able to know to get tested until potentially later in the week after he’d already played, after he’d already seen somebody, after he’d maybe touched this or done that.”

The Tour promptly sent a memo, user manual and special login code to players Wednesday to help them begin engaging with the system. According to WHOOP, band-wearers who eventually tested positive displayed “sharply elevated respiratory rates” two days prior to feeling ill. Breaths per minute while sleeping is the metric, which according to WHOOP should stay relatively stable overtime. Theoretically, the more information that asymptomatic carriers can get, the better the Tour will be able to control the spread of the virus within its traveling bubble.

It is unclear if this system will be provided to Champions Tour and Korn Ferry Tour players and caddies as well.