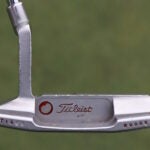 Tiger Woods has used his legendary Scotty Cameron Newport 2 GSS putter for 14 of his 15 major championship victories. It’s arguably the most famous golf club in existence, and while it’s unlikely to ever hit the open market, Woods’ gamer putter is certainly one of the most valuable pieces of golf merchandise in the world.

The club is so valuable, in fact, that an exact-match backup version of the putter is currently up for auction on Golden Age Golf Auctions with a top bid of $114,874. And the auction isn’t even over until August 28.

Prior to the start of the auction for Woods’ backup, I met up with Ryan Carey, the co-founder of Golden Age Golf Auctions, at True Spec Golf in Boston to check out the putter for myself and roll some putts with it. Seriously, Carey let me test out Woods’ backup putter. Due to its pristine condition and six-figure value, I was understandably nervous even touching the putter, but wow did it look and feel good. (Don’t worry, cameras were rolling the entire time, and we’ll be putting out a full video of the testing session in the near future.)

After the putter test, Carey joined our Fully Equipped podcast to speak on how he got his hands on the Woods backup putter in the first place, and why he believes it’s worth so much money.

On the podcast, Carey said that Woods’ red-dot Scotty Cameron putter is the “modern grail” of collectibles, and the backup is so valuable because Woods never switched out of his gamer.

“I think from this era of golf, the red-dot Scotty Cameron will be… we call it the modern relic,” Carey said on Fully Equipped. “It’s like the modern grail… legend has it that Scotty Cameron – in those early years, when they were working together with Tiger – would make 1 or 2 [backup putters] a year, and that would be the backup should it ever needed to be called into duty. Now, almost any other golfer on the planet, they did call in their backup. Tiger never did. So it has become this famous putter because of it, that the backup is more desirable in collector’s minds. It’s more valuable than even putters that Tiger has used, other than that red dot. And, of course, the 1997 Masters putter would obviously be pretty special. But, Tiger still has those. He’ll never sell them. The backup is the next best thing.”

So, the backup putter is worth north of $100k at auction.

But what about the real putter? Hypothetically, how much would the putter that Woods actually uses go for at auction?

“A couple years ago I was asked that same question, and my answer at the time was $3-5 million,” Carey said. “I’m absolutely wrong. It’s way more than that.”

Due to the recent spike in the sports memorabilia market, according to Carey, Woods’ putter would eclipse the $3-5 million mark that he estimated previously.

“The memorabilia market, especially on the top end, has gone crazy,” Carey explained. “Just the other day, a Honus Wagner baseball card sold for over $6 million, setting the new baseball record, which I believe gets set about every month now. So, [Tiger’s putter] would be among one of the most valuable pieces of memorabilia really in existence, baseball and everything. It would rival all of them.”

In Carey’s estimation, the only pieces of golf merchandise that could eclipse the value of Woods’ putter would be from the moon. Literally, from the actual moon.

“The only thing I can think of in golf that could surpass it, this is a little wild, but Alan Shepard’s club that he hit on the moon,” Carey said on Fully Equipped. “How about this… there are two golf balls on the moon. They’re there. I believe they’ve both been located. We know exactly where they are. Someone will get them. Will those be worth more? Possibly.”

During the Apollo 14 moon-landing mission in 1971, NASA astronaut Alan B. Shepard Jr. famously hit two golf shots from the dusty surface of the moon using a 6-iron. Based on a recent analysis by the USGA, Shepard’s first shot was “shanked” and traveled 24 yards, while the second ball went for “miles and miles and miles,” traveling 40 yards.

As of now, the golf balls are presumed to still be sitting on the surface of the moon. The Wilson Staff Dyna-Power 6-iron that Shepard used, on the other hand, is safe inside the USGA Golf Museum. And Woods’ putter? Well, we haven’t seen Woods in over six months, but we know the putter remains in good hands, hopefully to be seen again in action soon.