The equipment Tiger Woods used during his five Masters victories

Tiger Woods’ equipment has changed dramatically over the last two decades since his historic 1997 Masters victory. For Woods, his first major title coincided with a seismic shift within the equipment industry as manufacturers began to test the boundaries of distance, forgiveness and ball technology.

For the most part, Woods was more reluctant than his peers to embrace some key technological advances early on. He was one of the last players to embrace graphite shafts in his woods, and used a 260cc Titleist 975D driver until the 2004 season. His iron lofts are noticeably weaker than what’s currently found in the marketplace, and he’s used the same three-wedge setup, and gapping, since before he arrived on Tour.

Simply put, Tiger Woods is old school when it comes to his gear.

But that doesn’t mean he wasn’t ahead of the curve in other areas. He embraced solid-core ball technology when many were still using liquid-filled models and was one of the first to employ a true split iron set, in 1997, blending two different Mizuno iron models.

With Woods’ 2019 Masters victory in the books, it’s time to take a look back at his equipment during those five victories at Augusta National and highlight what made each setup unique. 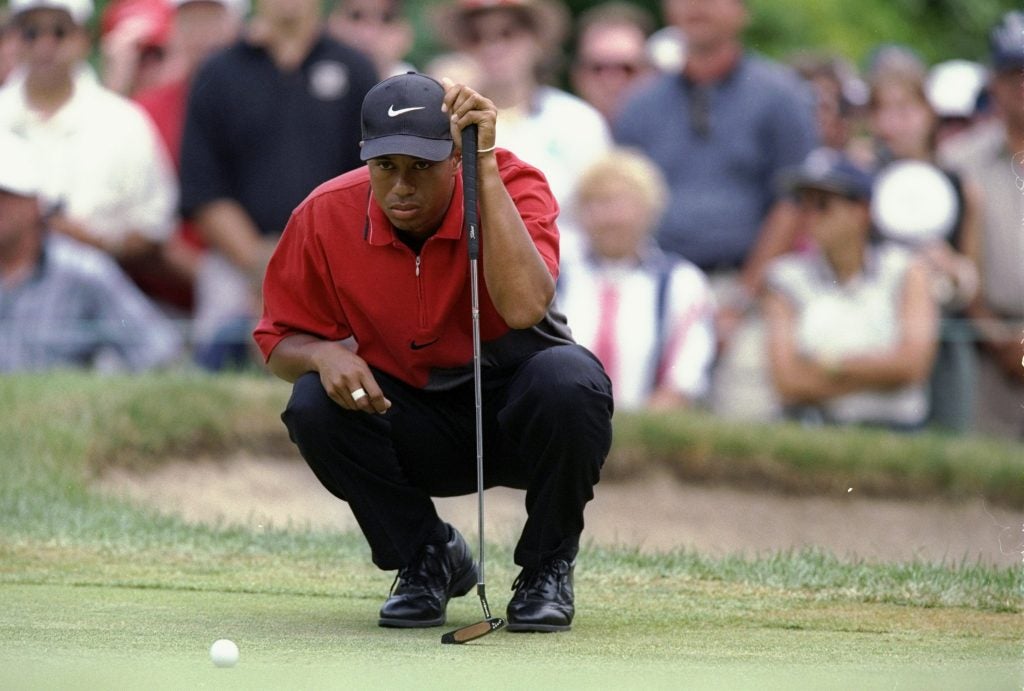 Notes: Woods’ iron set consisted of two different Mizuno models: MP-14 and MP-29. Blended sets were uncommon back in 1997; however, Woods noticed subtle offset changes from the long to short irons between the sets.

“For him it was all about trying to get the least amount of offset in his entire iron set,” said Mizuno Tour rep Jeff Cook, who started with the company in 1997. “You have to remember that Tiger played Mizuno irons going back to his time in junior golf and at [Stanford University], so he was well versed in our product. When you spend that much time around something, you start to pick up on subtle differences.”

For Woods, the MP-29 provided less offset in the long irons than the MP-14 and vice versa in the mid and short irons. To get the perfect amount of offset, Woods split the set in half, using MP-29 in the 2- through 4-iron and MP-14 in the 5-iron through pitching wedge.

The Scotty Cameron Newport TeI3 (Terrylium) is the second-most famous putter Woods has handled next to the Newport 2 GSS. The soft Terrylium insert was held in place by five screws that were positioned in the back cavity during the milling process.

To give the putter a feel and sound Woods could embrace, 32 vibration-dampening dots were used to conceal the screws. 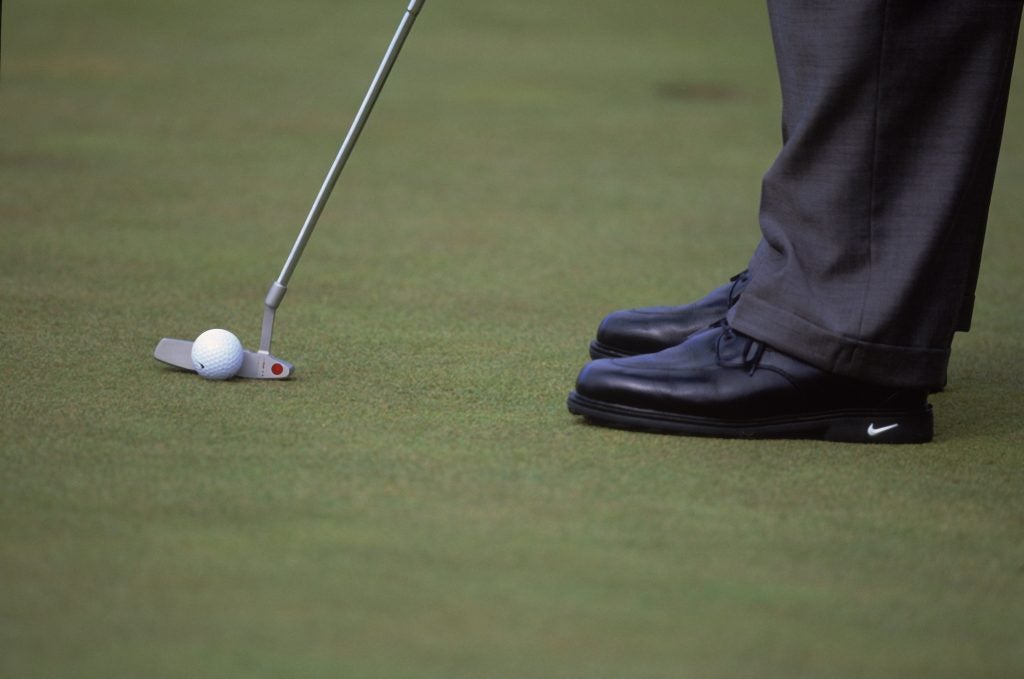 The 2001 Masters was his first win with the iconic Scotty Cameron Newport 2 GSS putter.
Getty Images

Notes: Two years prior to his second Masters win, Woods switched to a Scotty Cameron Newport 2 GSS putter made from a pricey German Stainless Steel. The putter has been by his side for 14 of his 15 major titles.

The red dot in the cavity and on the face near the toe is the calling card for one of the most famous putters in the history of the game. In actuality, they serve an important technical purpose, as Cameron had to get the head down two swing-weight points to match Woods’ preferred weight before shipping it off to him before the 1999 Byron Nelson.

“I have a lot of history with that one,” Woods said of the Newport 2. “I’ve tried other putters but when I pick this one up there isn’t any guesswork. I know how it’s going to perform on the course.”

He was also one of the first notable names to switch from a wound-core ball to solid-core construction after the 2000 Masters. Woods would go on to win the next four majors with the ball.

The following year when Woods won his second green jacket at the 2001 Masters — completing the “Tiger Slam” — all but four players in the field reportedly used a solid-core ball. 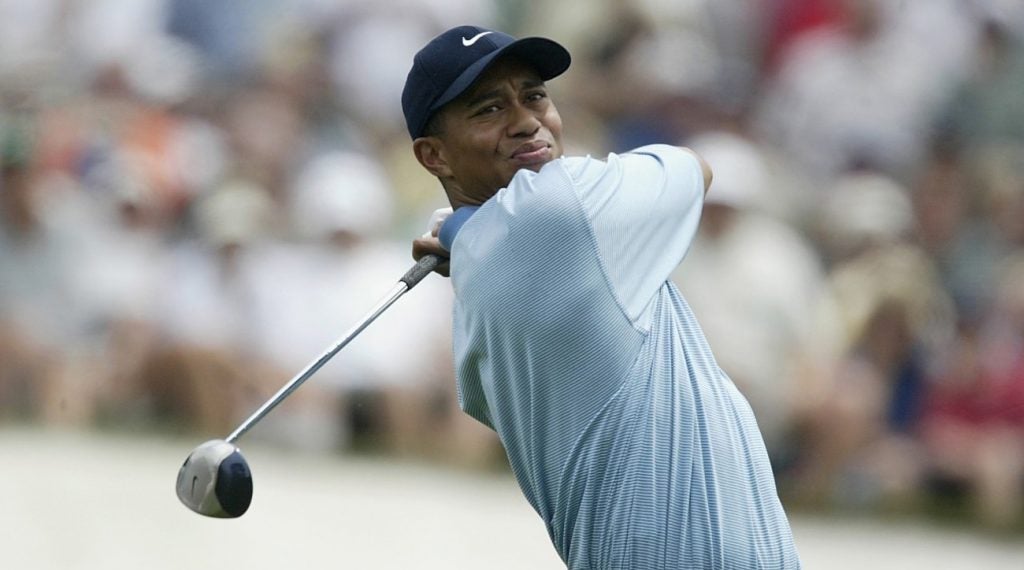 Notes: Woods notched his first Masters title with a Nike-designed Forged Titanium driver, marking the beginning of his transition into a Swoosh-heavy setup by the end of 2002.

If there’s one thing about Woods’ wedges worth pointing out, it’s that the Vokey Design 200 Series wedges he used had two-degree gapping. At least it appeared that way if you saw the lofts stamped on the 58- and 60-degree heads.

In actuality, Woods had the 58-degree weakened to 56 degrees, which not only reduced the loft but decreased the bounce to 6 degrees — a number not seen on a sand wedge used by today’s pros. 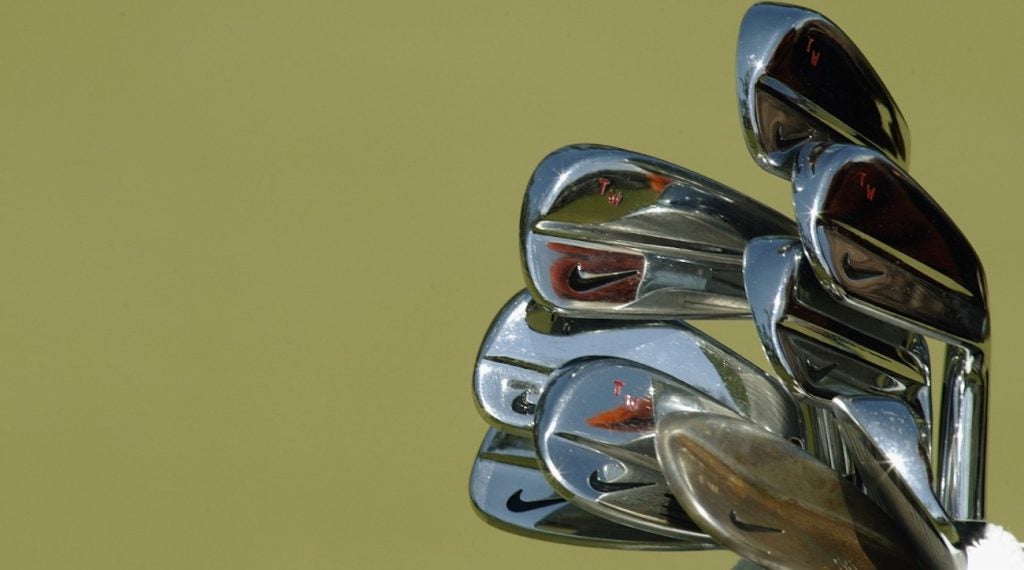 Notes: By the time Woods won the 2005 Masters, he had only been using a graphite-shafted driver for one year. The change coincided with his eventual acceptance of the 460cc driver head — he was using a 410cc Nike head prior to the switch — that’s commonly used today by professionals and recreational golfers.

The only non-Nike club that remained was the Scotty Cameron Newport 2 GSS, but Woods eventually benched it during the 2010 Open Championship for a Nike Method 001. Woods never won a major with 14 Nike clubs. 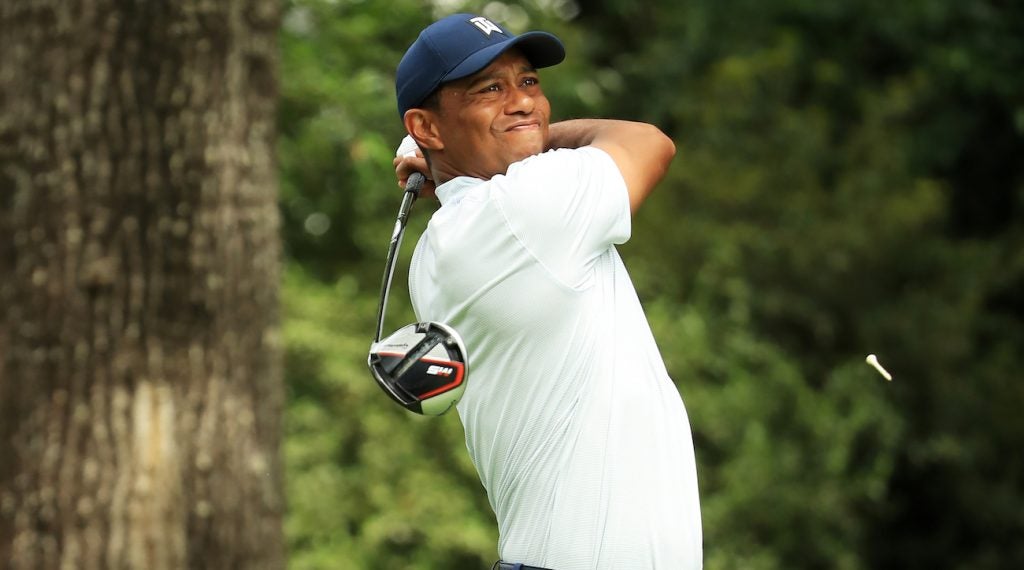 Notes: Woods’ 15th major title was his first with adjustable metalwoods and a set of TaylorMade P7TW irons that were added to the bag at the beginning of the year. The irons were made with the 15-time major winner’s direct feedback and underwent a two-year process before they were completed.

One equipment change that received very little fanfare leading up to the Masters was Woods’ decision to alter the weight setup of his TaylorMade M5 driver and 3-wood. Woods shed roughly 10 grams of weight by moving to a lighter Mitsubishi Diamana D+ White Board shaft — 73 to 64 grams (driver) and 83 to 73 grams (3-wood) — that most likely helped him pick up additional clubhead speed.