One of the main reasons the golf public has always been so curious about Tiger Woods is because there’s so much we don’t know. What does he do when he’s not in the public eye? What does he think about things? Fundamentally, what’s it like, being Tiger Woods?

There’s only golfer in modern memory for whom those curiosities are magnified: Anthony Kim. Tiger Woods is plenty mysterious, but Kim? When he disappeared from the golf world he literally vanished.

We stored up plenty of fond memories from Kim’s years on Tour. Michael Jordan stories. Ryder Cup shenanigans. Statement victories. Wild nightlife rumors. But in digging back through the archives, the two made one particularly revealing public appearance — and they made it together. There were no nightclubs or scandals involved, just a quiet, relaxed private clinic with Golf Channel cameras rolling. In the process, they revealed plenty about their golf games and their personalities, too.

Chapter 24: Tiger Woods and The Tackle

Longtime New York Times golf writer Bill Pennington was there that day, Oct. 22, 2008, for a special event: Tee It Up With Tiger. Nike had distributed a couple thousand platinum-colored golf balls in Nike One boxes at retail stores across the country and eventually whittled down winners to some two dozen.

Woods wasn’t playing; he was still recovering from knee surgery following his U.S. Open win earlier that summer. But he posted up on the 10th tee box at Trump National Golf Club in Los Angeles as groups came through, putting pressure on and talking good-natured trash.

After the round, Pennington remembers in his book, On Par, that Anthony Kim arrived — by helicopter. That’s when the cameras got rolling and where we join the proceedings in the video below. Have a watch (just the first 20 minutes; after that it repeats for no clear reason) and read on below, where I’ve logged my 10 most entertaining takeaways.

1. Anthony Kim had no warm-up routine.

“It just depends on how I feel,” Kim tells Woods in the video. “I’m not one of those people that starts out with a lob wedge or sand wedge. Sometimes I hit 7-irons and hit two drivers and go tee it up — I don’t really have a routine.”

This is an incredible start to this treasure trove of a video for two reasons. One, Kim is talking to someone who does exactly the thing he’s being dismissive of; Tiger Woods has a famously regulated warm-up routine. Second, Kim’s line is followed by his bag toppling to the ground next to Woods, illustrating his point about attention to detail.

“I’m a little more regimented in my warmup,” Woods says a minute later, and Kim cackles. It’s an awesome moment.

2. Tiger Woods had a cool way to talk about ball position.

One spectator asks whether Woods believes in the idea of moving his golf ball around in his stance for different clubs, and Woods has the perfect illustration: he lines up three golf balls to illustrate that his driver will be slightly farther up in his stance (the forward-most golf ball) while sand wedge will be farther back (the rear-most ball) while a mid-iron would be somewhere in between.

This is where we really get a sense of just how much Kim plays by feel. It’s not that there’s no method to his madness. It just seems like he has a hard time explaining it, and that he’s never really thought about it in a way that’s translatable to other people.

“Obviously I’ve been taught from my dad, my dad got a lot of inspiration from Tiger’s father to learn how to play the game the right way and learn the fundamentals first,” Kim says. “But I’ve just felt like, if I stick to one thing, it’s hard for me when I’m not playing well to get out of that funk. So I just try to mix it up every day, have a little fun with it, try to hit a little cut today, and as long as the ball’s not going left for me, I really don’t care what the ball’s doing.”

So, back to that ball position?

Woods recalls his father Earl trying to explain how to control trajectory to him at the ripe age of 3. And honestly, we should all be paying attention to this part.

“He would always say, ‘Make the same backswing, and then either finish up at your ribs, at your shoulder or above your head.’ And that would determine the height of my golf shot,” Woods recalls. “So if I was to hit a nice low one, I’d finish off rib-high. Hit something pretty much normal, probably finish around my shoulders. If I wanted to hit a high ball, I’d finish above my head. And that’s how I learned.

“I know it sounds so simple but when you’re under pressure that’s what you relate back to, that what you always go back to, you go back to things that are easy, things that are natural or innate. For us, we have different ways of looking at it but still very simple… we all learned this in math: KISS. ‘Keep it simple, stupid.’”

It’s obviously not as simple as Woods makes it sound. But it’s aspirational simplicity, at the very least. 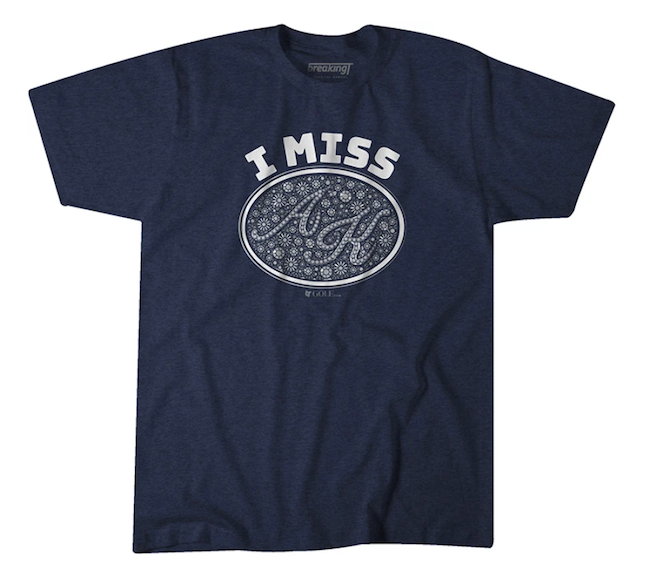 Remember Anthony Kim? I mean, how could you forget those shiny, over-the-top belts he’d rock week after week? Get this tee to remind your buddies of the legend.
Buy Now

4. Anthony Kim explains why he hits a fade.

The only thing Kim seems consistently sure of is that he doesn’t want to hit a hook. He reiterates this point a handful of times in the 20-minute clip: his enemy is a ball going left. Woods says that when he’s playing his best, he’s hitting a draw. Kim?

“If I hit a draw, I tend to start hitting hooks. And just to stay away from that, I try to play a fade. And if it slices 20 yards it’s at least going to sit and spin and stay in that vicinity. But if I hit a draw it could go a long way out of bounds.”

Fair enough. All you slicers out there can take solace in the fact that A.K. in on your side.

5. Tiger explains how hard he was taught to swing as a kid.

Maybe in the Bryson Era we’ll quickly learn that speed is quite literally the only thing that juniors should be chasing. Still, it can’t hurt to consider the way the greatest modern golfer was raised, so here’s what Earl Woods told Tiger about swinging hard:

You can see that position below; it should look familiar, as it’s a position Woods has finished in time and time again over the years.

“As soon as I’d swing as hard as I could, fall off balance, well, that’s too hard,” Woods remembers. But everything up until that point? That was fair game.

6. Kim had no idea how many majors Woods had won.

Recall that this was the fall of 2008; Woods had just finished off his 14th major championship on one leg at Torrey Pines in incredibly high-profile fashion. But this is the beauty of Anthony Kim, who was clearly off in his own world the entire time. He first guessed that Woods had won eight, a number he later modified to “more than 10.”

“Ten majors? Come on!” Woods says at one point, to laughter.

A year later, Kim recalled the miscue to Jason Sobel, then with ESPN:

Sobel: What was Tiger’s response that day you said eight?
Kim: I wasn’t paying attention, because I was trying to guess how many majors he had won. I wasn’t sure if I was close or not. Then I saw everyone start laughing and I realized I was probably not even close. I think he had 12 then.

7. Anthony Kim has the best range philosophy you’ve ever heard.

It’s clear that Kim doesn’t have a set warm-up routine, and one of the positives of that approach is that he never gets demoralized if his range session goes amiss. It’s clear from a knowing nod he gives Woods that he’s used to bad range sessions followed by good play. His line?

“Whatever the ball does, it does. I’m not worried about that, just trying to get a tempo out here and make sure that I’m loose for the rest of the day.”

8. Anthony Kim doesn’t know the loft of his driver.

Look, plenty of golfers don’t know the exact specs of their equipment. But you’d figure a top pro would know literally the most basic number associated with his driver.

“What’s the loft on that thing?” Woods asks Kim after watching him stripe a driver.

Tiger laughs, incredulous. “Seriously, you didn’t have to read that, did you?”

Kim shrugs. “I didn’t want to lie to you guys!”

9. Tiger Woods is very much the elder statesman.

This is more an impression than a specific moment, but it’s notable watching this that my impression of Woods — generally perceived as the coolest golfer — comes off as square and bookish when put in relief by Kim. Woods is the one with the exact yardages. He’s the one with the prescribed routines. He knows how to hit the ball low and he knows why it stays low. Kim, by contrast, doesn’t seem to know or care much about any of it. He just does it, he doesn’t know why. Which brings us to…

10. Anthony Kim’s line about wedges is the highlight of the entire thing.

The question comes in from the crowd: “On your wedges, specifically your sand wedge, how far do you hit that when it’s a full swing?”

The answers perfectly illustrate the contrast in styles.

Kim: “My answers are terrible if you guys are trying to learn something. I’ve just grown up as somebody who feels his way around the golf course. Tiger hits his sand wedge 118. I don’t — sometimes it goes 100 yards when I hit it full and sometimes it goes 125.

“It just — it just depends on the day, I try to figure that out right before I go out on the golf course. Sometimes when I go three-quarters back it goes further than when I go full back. It’s all a big guessing game to me.”

The legend lives on.