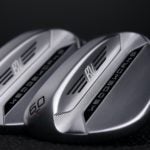 Bob Vokey originally created the T Grind for former PGA Tour winner Tom Pernice Jr. These days, the lob wedge is a favorite of two major winners: Justin Thomas and Jordan Spieth. Designed for firm conditions and those with a shallow attack angle, the low bounce and narrow crescent surface is an ideal option for most Tour courses.

For recreational golfers who have aspirations of using the same wedge found in Spieth and Thomas’ bags, Vokey now offers the same T Grind (58 and 60 degrees) as part of its WedgeWorks program. When comparing the T Grind to an L Grind, the one noticeable difference is the T’s wide flange that allows for a lower measured bounce to cut underneath the ball.

“Wedge play is an art, and the T Grind brings out the best in the artist,” Vokey said. “The leading edge stays low to the playing surface as the wedge is rotated which allows you to hit a variety of shots from tight lies. This is the wedge that really made Vokey Grinds an important part of our process – and still to this day is a great option.”

While Thomas and Spieth aren’t the only players on Tour using the T Grind, they are the most recognizable. Thomas took to the grind after testing a number of low-bounce options leading up to the 2019 Presidents Cup. He now travels with the T and a low-bounce K Grind that he’s able to plug-and-play depending on the course and conditions.

Spieth, on the other hand, has a history with the wedge dating back to his time at the University of Texas when Vokey’s T Grind was his lob wedge of choice. Spieth eventually switched to the L Grind when he turned pro before going back to the T Grind last year after finding one of his old wedges from college at the teaching studio run by his coach, Cameron McCormick.

From a tech standpoint, the wedge still features the same forward weight placement as the retail SM8, to assist in squaring the head up at impact for improved distance and trajectory control. The spin-milled grooves are individually cut — microgrooves can be found in-between the main grooves as well — for extra zip, especially on shots around the green.

Vokey’s WedgeWorks T Grind retails for $199 (right-handed only) and is offered with a variety of finishes (Tour Chome and Raw), toe engravings, stamping options, paint fills and hand grinds (raw finishes can be ground to exact specs).

Spotted on Tour: A lightweight top for sunny summer days